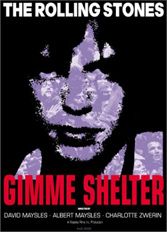 Albert and David Maysles were filming a musical documentary about The Rolling Stones’ 1969 American tour when they caught lightening in a bottle. The Stones’ ill-fated decision to play a free concert at the Altamont, California speedway near San Francisco with the Hell’s Angels as the self-anointed security force went awry (on film) and was tipped as Woodstock’s inevitable comeuppance. No more innocence.

Footage of the self-satisfied Stones, Jagger’s preening and Keith Richards’ disdain, is essential viewing for rock fans (as are stretches of Jefferson Airplane and Ike and Tine Turner). But it’s at Altamont, where a fan is stabbed as Jagger rushes through “Under My Thumb,” that a rock movie veers into social history. Jagger’s efforts at crowd-control are in vain. Meekly, the band plays on.

Lawyer Melvin Belli making haphazard security arrangements before the concert is a bad omen and interviews with band members afterwards make them into troubled little boys. It’s rare to see a humbled Jagger, but it’s all here — along with a smirky Madison Square Garden gig. Brilliantly cut and composed.