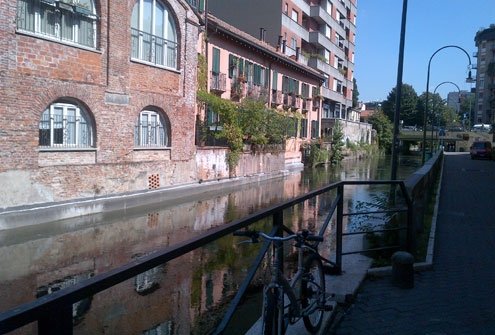 Naviglio Martesana in Milan: the waterways were once a vital part of city commerce. Photo by Madeleine Johnson.

Milan has two major canals, the Naviglio Grande and Naviglio Pavese, which run through the city’s Navigli neighborhood where bars and restaurants thrive along their banks, helping to liven up the city’s movida, or street-life. The waterways are part of an extensive, 1,000-year-old canal system that once ran from Lombardy’s northern lakes and rivers to its southernmost agricultural basin. In fact, Milan was once labeled as “Little Venice,” with water running through central Piazza San Marco and along the route of the 94 bus, which today circles a party of the city still referred to as the Cerchia dei Navigli, the Navigli Circle.

With locks designed by Leonardo da Vinci, the waterways served as transport routes for livestock, cheese, hay, coal, lumber, sand, and granite, later helping to supply the city in its early industrial phase, when Milan grew into a thriving European business capital.

In 1929, northern-born dictator Benito Mussolini, an ardent believer in all things modern, ordered the canals covered over to make way for an expanded system of trams and buses. Only in 1985 did local activists begin working to conserve traces of the city’s watery past. A project to commemorate the historic role of the canals gradually grew into a full-blown restoration project. A 2011 referendum to reopen the Navigli garnered nearly half-a-million votes, and Milan’s city council recently voted to reopen two canal sections.

Gianfranco Colitti, a retired economist and business executive, is secretary of “Riaprire i Navigli” (“Reopen the Navigli”), the organization spearheading the canals campaign. He chatted with Madeleine Johnson regarding efforts to reopen Naviglio della Martesana (or Naviglio Piccolo) and the Cerchia dei Navigli, the inner ring of the Naviglio Grande canal, the city’s most extensive waterway. These are excerpts from their conversation.

How did the idea of making the canals usable again get started?

“Riaprire i navigli” was born in August 2012. The “Amici dei Navigli “ group had already begun working to revive Milan’s historic memory. But we realized we could go further and actually reopen the entire Navigli system, connecting the Adda and Ticino rivers with 90 kilometers of navigable water. We thought, “Why not give Milan the chance?” Our “crazy idea” is to redesign Milan with a focus on water.

We don’t have the Thames, but returning water to Milan’s center would give it a whole new dimension. Milan identifies itself through work. But you also have to consider the quality of life, being able to stroll, pause, and enjoy life’s beauties. Water helps in all this.

It’s important to emphasize is that reopening the Navigli is already provided for in the city plan ratified by Milan’s city council in 2012. The authorizations are there; the comune (city hall) has approved. All that’s missing is money…

We don’t want the commune to put up the money — it just doesn’t have the €140 million the project will take. If we ask Milan to find the money as part of a public works project, we’ll end up waiting 15 years. We’re also in a recession. Plus there’s a lack of trust [for the city]. People say, “They can’t even fill potholes!”

So where will the money come from?

We want the commune to be involved, but we’re seeking funding elsewhere: from foundations, project financing, the Lombardy region, and private investors.

One model is profoundly Italian: the chapels in our historic churches that were built from contributions that came from local families and associations. There’s also so-called crowd funding. The first Milan subway was built as a result of citizens purchasing bonds. Though we can’t do that now, it’s a model.

We’re asking 60 other towns along the navigli to help. If they want to give money, we won’t say no, though these are tough times. We’re also asking businesses and groups like Slow Food and Eataly. We’ve gotten in touch with everyone in the water business, since we’re working for water. For water, by water!

Public reaction has been positive. Whenever I mention it, people say che bello! But being Italian, it’s ma, però (yes, but)… Maybe we’ll never be able to do it, but it’s worth a try. We don’t want to return to the past, but be open to the future. We want to focus on technology and modern ways of thinking.

I’ve heard that Milan Expo 2015, which will promote agriculture and sustainability, is building a canal along the Strada Verde, a green mile-like string of parks around the city.

Unfortunately we were born a year or two too late for Expo, otherwise we could have worked with them. As for their canal project, why build a “fake Naviglio” when there are already several real ones?

It’s not a technical one, because the Navigli … are just covered or filled in. The canal bed is still there and water still runs under Via Melchiorre Gioia and Viale Piave. The biggest challenge is talking to investors in terms of goals and returns.

We focus on tourism, telling them the canals are navigable from Lago Maggiore to Lago di Como, a richly historic area with monuments and villas. It could be like Brenta [where boats ferry tourist from Padua to Venice]. We envisage a bicycle path that connects to one along the Po River all the way to Venice. Some 300,000 people per year use the bike route along the Danube. If we even got half that…

We also talk about renewable energy from micro-turbines. We can use the elevation changes or the flow of water along the streambed to produce energy. Heat pumps could heat nearby residences.

Then there’s the matter of real estate values, which rise wherever there’s a subway stop. The same thing could happen with buildings along the Navigli. Reducing cars and making life more tranquil along the Via Melchiorre Gioia will raise housing values and help create wealth.

There’s an old idea the Navigli were sewers. But people actually swam in them. Even though the canal beds were cleaned and a sewer system installed toward the end of 19th -century, the sewer idea remained. In 1929 and 1930, Italy conceived of the city and the nation in a new way. There was Futurism [the modernist art movement.] The car represented modernity. The canal was a thing of the past and needed to be buried. Maybe that was right at the time. But it’s different now. The car is no longer the center of all things. Area C works [Milan’s strict traffic reduction system].

Who opposes you and why?

Skeptics have four big questions: Rats and mosquitoes, the [future of the] movida, transport and financing. Rats and mosquitoes are fake problems. Mosquitoes don’t breed in moving water and rats avoid clean water. The movida in Via Ludovico il Moro [the street has cafes and nightspots] is a zoning issue that has nothing to do with water.

The project would take no more than two to three years, since we can’t close the center any longer that that. Traffic would be rerouted to the outer ring roads. The center of Milan is already virtually closed anyway.

It would have to happen in two phases. The first would improve the state of Via Melchiorre Gioia. The second — working on the cerchia — is harder because the old shoreline would have to be modified for traffic and building access. The Naviglio abutted the houses and main entrances were on the water. Building entrances are now on inner streets and they’d need to be turned around again. La sciura Milanese (Milan signora) won’t be happy if she can’t bring her shopping home. And you can’t parachute people in!

For now we’re working on awareness, because the project needs citizen support. They do want water in Milan. First, we have to make people sensitive to the issue, and second, we need to propose solutions. We must work like mad!