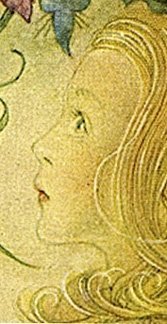 You ask Angelica and she says...
L

et us now suppose…. It is 1965. You are 12. You have been sent to Rome to see your mother. It is mid-spring, in a villa. The first thing you do is befriend a lizard. The lizard’s name is Giacomino. Giacomino is like an emerald that moves. You find him in the alley, under the wiggling stone and near the tomb no one touches. You find him and he (you suppose he’s he) looks at you curiously, wondering why you seem so remote, at least to him. Giacomino tries to dart free under the wheel of the Vespa, but you cup him under your tiny curved hand. This you remember. Your hand the way it was then. Not large, not even small; a tiny hand. Your right hand.

It is mid-spring, in a villa, and Giacomino lives in his shoebox. You put him on the terrace for recreation, so he can roam. He speaks to you. Lizards have a language, but you confide this to no one, not even your mother. Your mother, who no longer lives with your father, worries at times that you are too alone. She finds you by the wiggling stone — you are seeking a friend for Giacomino — and asks you to come out. She has a girl by her side.

You do not like girls, this you know, a kind of bond and oath you’ve made to yourself; you do not like girls because you cannot trust them. Once you heard your mother speak to your father on the telephone. She said to him she would never leave “because of the boy.” Now, you are here, at least for now, away from your father. You have Giacomino, and now the girl.

Let us suppose the girl is named Angelica, because she looks like an angel. This you remember. She is 17. Angelica is to take you on walks in the bigger park near the villa. She will do this at lunch, your mother says, when all others are resting and sleeping. You do not understand, at least at first. You have been sent to Rome to befriend lizards, not girls. And you have a responsibility to Giacomino, the emerald in the shoebox. Reluctantly, you show the box (you have made air holes) to Angelica, who surprises you by admiring it. You have never met a girl like Angelica. She does not speak to you like a boy. She seems actually to like you.

At times, when you’re squatting in the sun, caressing the stones, seeking more lizards, she looks at you closely, squinting, as if examining a problem. Where, she asks, do freckles come from? It is 1965 and you are 12 and no one has ever asked you this before. You touch your cheeks with your fingers and feel for them, as if they might provide her with answers. But the freckles are simply there.

In the park, during the week, Angelica leaves you alone to seek out the bushes and clumps of green where most lizards rest, out of the sun. But sometimes you feel like inviting her along, mostly to see her eyes up close, which are green, like your mother’s. Sometimes Angelica ruins your lizard hunts because she whispers. But when you put a finger to your lips she hushes, and she puts a finger to her own. You are quiet. And you can see her small hands, the palms, smooth, like yours.

One day, you ask Angelica to do an important thing. You have thought about it all night and most of the day. You consider yourself bold to ask her. It takes courage to ask this. Will she compare her palm to yours? Will she, despite your freckles, place her palm on your palm so you can decide which is larger?

You do not wish to be a boy. You want a bigger palm. It’s Angelica who makes you feel this way and you’re not sure way. Let us suppose she looks like an angel and has green eyes. So you ask Angelica if she’ll do it. And she smiles and applies her palm to yours. She teases your hair and together you each put fingers to your lips. You say nothing. You smile.

Her palms are your size, perhaps even smaller. You call them medium.

You find Giacomino dead on a Sunday. You do not know he is dead. You do not know death. Giacomino is in the corner of his box, which you have taken to the green space of the villa. When you extend your finger at him he does not move. You speak his name but he lies meek. You do not know what to do so you do what you’ve seen; you dig a small hole and place Giacomino in the hole.

This is when Angelica finds you, supposing it’s a Sunday. This is when she sees the tears falling from your freckles, your finger on your lips. This is when you remember your bond and your oath to yourself. Girls bring bad luck. Girls leave.