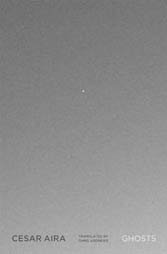 Here is the story: Chilean night watchman Raúl Viñas, his wife Elisa and their family live in unfinished Buenos Aires luxury apartment complex. Their daughter Patricita, Patri, is a “frivolous,” socially-awkward 15-year-old (“a little dreamer living in a looking-glass world” and “mixed up”); she’s Elisa’s daughter by a youthful liaison. Will Patri ever find a man? Elisa wonders.

It is the night of December 31, high South American summer, and the extended Viñas family has gathered for a New Year’s feast. They’re unremarkable figures except for one detail: All see ghosts. So common and benign are these resident ghouls — “idiotic bobbing toys,” “floury clowns,” nudists with comic-book penises — that the family has learned to take them for granted. True, Elisa worries about the “bad influence” the carefree out-of-body ghosts might have on her kids, but little more.

New Year’s revelry ushers in epiphany. The mute ghosts suddenly begin taking a particular interest in Patri, and she in them: They’re naked, after all, and she’s attuned to her “mysterious dream-world.” She follows a few to the rooftop swimming pool, deep but unfinished. The ghosts are having a feast and want the presence of her company. But first…

Aira is among the great subversive writers working today. His approach to the rational has the narcotic aroma of morphine made fragrant. The ideas proposed in this slim novel are galactic in the vein of Borges. Does what is incomplete — an apartment building, say — even exist? Does a non-building, once done, change shape, confining “hostile reality”?

For Patri, the glowing ghosts are “innocent” and “warm.” Even their genitalia, “different from anything she had seen,” tug at her imagination. Finally, she feels her heart contract. Aira’s surging, off-kilter allegory is about many, many things, foremost how sexual puberty, self-consciousness and dreaming flatten the difference between worlds.

Aira, an Argentine, was Roberto Bolaño’s favorite living South American writer. It’s woeful that of his dozens of novels, this one first published in 1990, only four have been translated.