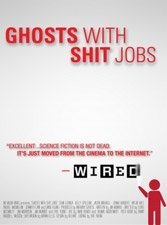 Jim Munroe’s quirky faux-documentary subverts cultural relativism to create a 2038 world in which Asia dominates the bankrupt West, whose “subjects” are the ostracized outsourcees of the title. As “revealed” by the Chinese news feature show “Window on the World,” downtrodden westerners in Toronto are employed as baby-makers, silk gathering brothers, digital janitors and human spam — literally. They’re the reverse clichés of today’s West-propelled call-center gag. They toil to get robo-babies up to code, “harvest” silk from under bridges, erase brand names from the “Way Back Machine” (a rich Chinaman’s digital toy), and, for the more criminally inclined, do the bidding of the Nigerian Spam Cartel in the professional spamming racket. “We’re lucky to have any work here in the West,” explains the silker, a “European refugee.” The digital spammer lost everything when his family’s Cloud was repossessed (“Do you find it shocking, the way we live?”). Thankfully, he still has a sister in Mumbai who sends him money.

Munroe treats all this with just the right amount of bite, using invisible touch screen tapping as a form of performance art. His eye candy is Serina the spammer, a kind of futuristic high-class hooker who uses all human contact (sex included) to drop product hints while angling for an eastern “eye job.”

The “meet the woeful Western losers” conceit works until it runs out of steam, after which interviewer questions (“Have you ever considered learning Mandarin and getting a better job?”) begin weighing down the send-up.

In all, this is less science fiction than shrewd social satire, a sobering kind of “Sleepers,” Woody Allen’s futuristic comedy in which all the ills of the present are manna in the future. In Monroe’s “Texas Flu” future, eastern outsourcing and cheap labor is now the wrecked western norm, and all things digital spoofed until they reek of sadness.