Ghosts of the southern wild 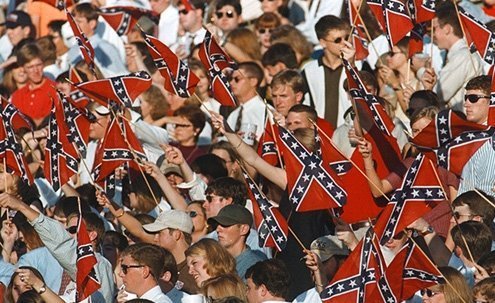 n some mornings in our Mississippi town of Water Valley, we wake up to the sound of a truck honking the 12 familiar notes of “Dixie” as it rounds the corner onto Main Street. As long as it’s not on a weekend, we might chuckle as we imagine the moment when the truck’s owner decided, “I’m going to deck it out just like the guys from ‘Dukes of Hazzard,'” and then actually stuck to the plan.

But in recent months — and in recent weeks in particular — those same notes strike a chord of brash insensitivity.

At a time when African-American men and women can’t even find safety in their places of worship — as demonstrated by the teenager Dylann Storm Roof’s racially motivated murder spree at a historically Black church in Charleston, South Carolina — it feels inappropriate to direct any quaint nostalgia toward the “Old South.” Consistently, we’re reminded that the ethos of the Old South has not been relegated to the past but remains alive and well in the angry hearts of some of our neighbors. While certainly the bigger issues of systemic racism and gun control should be at the forefront of our thinking, the power of symbols should not be shirked, either.

“Dixie” is not just a joke or a memory of ancestors past: it’s a political tool rife with ideology. It states clearly, “What you other people associate with this song doesn’t matter — what matters is its importance to me.”

“I Wish I Was In Dixie,” known commonly as “Dixie,” was originally penned in the 1850s for a blackface minstrel show. It was replete with lyrics that mocked African-American vernacular. As it acquired popularity, it became the national anthem for the Confederacy, and included more explicit references to the Civil War.

Despite its origins, it was a favorite of Abraham Lincoln and Robert E. Lee alike. Along with the Confederate Flag, the tune has been touted as a sanitize-able symbol of the past, of shared Southern culture — independently of race or political beliefs.

But when all’s said and done, the fact remains that symbols can rally some and alienate others

My wife and I observe this tension almost daily. We live about 20 miles from the University of Mississippi in Oxford, also known as “Ole Miss,” and “the Harvard of the South.” The university’s two monikers describe the campus’s competing intellectual and historical nexus: on the one hand, it is affectionately referred to by the same name slaves used in addressing the master’s wife; on the other, the university hosts competitive and progressive departments in Southern and African- American Studies, creative writing, and more.

Still, as recently as 2009, the Ole Miss chancellor had to intervene to bar students from bringing confederate flags to football games. The Ole Miss Rebels, helmed by the Colonel Rebel mascot, finally asked the university band to stop playing “From Dixie, With Love” (a medley of “Dixie” and “Battle Hymn of the Republic”) during games because fans had begun shouting, “The South will rise again!” during its performance.

These symbols wouldn’t seem threatening if disturbing actions didn’t arise in their vicinity. In the past three years alone, the university has had to deal with increasingly overt displays of racism. In 2012, more than 400 students gathered to protest the re-election of President Barack Obama, shouting racial slurs. Last year, a noose was found around the campus statue of James Meredith (a civil rights activist who was the first African-American to exercise his right to attend Ole Miss). Yet the white South seems convinced that the symbols are no more than pieces of an old and shared culture. Taking offense at them encroaches on freedom of speech, abrogates history, or is just too darn politically correct.

In “Confederates in the Attic,” Tony Horwitz’s 1998 examination of the Confederate legacy, the author interviewed a young Alabama preacher named Michael King about why he found Confederate memorials offensive. “The way I see it,” King said, “your great-grandfather fought and died because he believed my great-grandfather should stay a slave. I’m supposed to feel all warm inside about that?”

Dylann Storm Roof’s website and Facebook page sported photographs of Roof wearing symbols of white supremacy, foisting the Confederate flag, visiting Confederate graveyards, and burning the American Flag. Instead of feeling alone in his hatred, Roof used the symbols to see himself as an agent of a large and powerful collective. He might well have committed his unspeakable atrocity with or without collective “support,” but this broader sense of belonging certainly contributed to his decision to bear arms, just as the symbols he used anchored an ideology he could associate with, to the point of thinking he was acting on its behalf.

Ultimately, the path forward lies not in disregarding the lives of the Confederacy or ignoring history, but in disallowing the honoring of symbols that drive people to unite in hatred.

In 1962, Bob Dylan’s first performance of “The Ballad of Emmett Till,” about the brutal beating and murder of a black boy in West Tallahatchie County, Mississippi, emerged as a bootleg recording with a closing verse that went:

This song is just a reminder

To remind your fellow man

That this kind of thing still lives today

In that ghost-robed Ku Klux Klan

But if all of us folks that thinks alike

If we gave all we could give

We could make this great land of ours

A greater place to live.

It was a quaint and hopeful view, one that even 53 years has not yet been fully realized.