Ghosts of the lynched 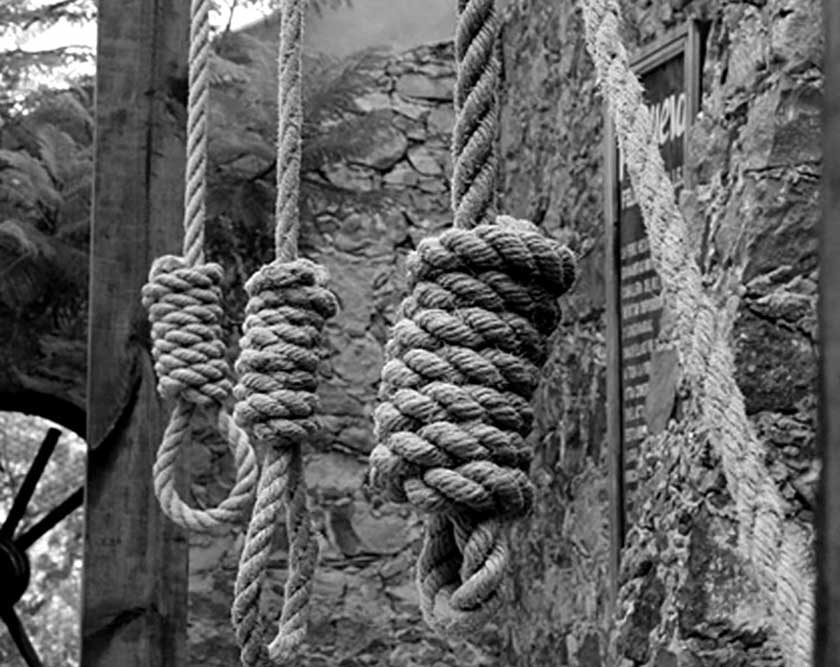 A visit to the National Memorial for Peace and Justice outside Montgomery, Alabama gives a a Floridian cause to hang his head in shame. More than 3,500 African-Americans were lynched, mostly between 1870 and 1950.
S

tanding under a monolithic steel slab, one of hundreds suspended from the polished wooden ceiling of a giant multi-level square pavilion on a hill overlooking Montgomery, Alabama, I crane my neck and squint to read the five names etched in shallow relief.

I whisper their names, a little prayer to the gods who oversee the souls of those victims of the racial injustice that has plagued the United States like a cancer. The five names of the people lynched by angry white mobs in Leon County, the seat of Florida’s state capital. Rumor has it the tree from whose branches those men hung from still stands downtown, near the site of the old jail.

It’s a gut-wrenching moment, made more imposing by the contortions I have to go through to read the names. The National Memorial for Peace and Justice is not designed for comfort. It is a place intended to make you feel uneasy, increasingly so as you walk along the corridors of this open-air pavilion, under the silent, motionless slabs with the names of the thousands of people murdered because of their skin color.

It is a sobering experience, and walking around the six-acre pocket park in which the memorial is sequestered gives one time to reflect on the centuries of struggle we’ve collectively endured. Because the injustice levied upon our Black brothers and sisters affects us all.

Rumor has it the tree from whose branches those men hung from still stands downtown.

As the architects (the MASS Design Group) of the memorial describe it, their collaboration with the Equal Justice Initiative recognized the need for a memorial space that “embraces the truth and inspires reflection and change.”

“The Equal Justice Initiative documented more than 4,000 racial terror lynchings in twelve Southern states between Reconstruction and World War II, in one of the most comprehensive investigations to date,” the architect’s website explains.

The pavilion suspends 800 Corten steel monuments to represent each county in the US where lynchings took place, each engraved with the names of its victims, the architects explain. The monuments repeat in the memory bank on the grassy banks outside of the pavilion.

There are also sculptures to serve as reminders that these people arrived in chains, surviving a harrowing journey across the Atlantic Ocean in the bowels of leaky sailing ships.

I’d wanted to come here for years but didn’t have the chance. Moving to Tallahassee several years ago put me within four hours of Montgomery, and the Friday after Thanksgiving I suggested to my girlfriend at the time that we go for a ride.

The memorial was easy enough to find. We walked past the fountain with the names of the slain civil rights leaders chiseled into granite blocks, and I found the names of Harry T. and Harriett V. Moore, a Black couple from Mims who were the first martyrs of the Civil Rights struggle when a bomb blew up their home on Christmas night, 1951.

They had just celebrated their 25th anniversary and left behind two daughters. Their murders triggered local and nationwide protests, and inspired Langston Hughes to write, “And this he says, our Harry Moore/As from the grave he cries/No bomb can kill the dreams I hold/For freedom never dies.”

As a white male, I realize I am privileged in ways that protected me all my life from the kind of horrors and abuse most Black Americans are subjected to on a daily basis. No amount of empathy can put me in the shoes of even the most privileged person of color in my age group.

But I’ve tried my entire life to keep my eyes open, to educate myself to the differences of being seen and not seen, of being the Other, and a constant reminder of the violent, evil side of our cultural heritage. I’ve read my James Baldwin and “The Fire Next Time”, Richard Wright’s “Native Son”, Ta-Nehisi Coates’s essays to his son, “Letter from a Birmingham Jail”, Toni Morrison’s “The Bluest Eye”. I read Alice Walker’s “The Color Purple” and watched the movie. I watched “Roots”, “A Raisin in the Sun”, “To Kill a Mockingbird”, “The Learning Tree”. I know why the caged bird sings and have tried to understand colored girls who have considered suicide when the rainbow is enough.

But it is something else to be confronted head on with the evidence of our systematic terrorism of an entire group of people for trying to gain the same rights that white folk take for granted.

It’s something I thought about standing in line to get tickets to the memorial and the Legacy Museum just a few miles downtown, me and my girlfriend the only two white people in line. “This is something every white person needs to see,” I thought-whispered. Kicking and screaming if necessary.

The Legacy Museum, located in a former warehouse where slaves were stored like cattle until they were auctioned off, packed a lot into its small space, and it was overwhelming. That was probably as the founders and curators at the Equal Justice Initiative designed it.

No amount of empathy can put me in the shoes of even the most privileged person of color.

You are immediately confronted by folks in prison cells — men, women, and children. These mannequins represent slaves unjustly imprisoned. From that corridor, you enter a gallery showing the history of blacks in America from their enslavement to emancipation to the oppression of reconstruction and the enactment of Jim Crow laws, the horrible period of lynchings, shootings, and live burnings, and the design of a criminal justice system that has disproportionately impacted the Black community more than any other group.

It really made clear the continuum from slavery to incarceration as a means of control.

One of the most affecting displays in the museum, which tied back to the memorial, was a display of jars containing the soil from the towns where each of the lynchings took place.

“The community remembrance process allows communities to confront history by becoming active participants in the commemoration of lives unjustly taken,” the MASS Design Group website says. “Strongly rooted in place, the soil collection process served as a prelude to the memorial.”

We stared at those jars, considering the substance of the soil they contained. As we went back to the memorial to wander among the suspended steel monuments I couldn’t help but think of the connection between earth and sky, how our bodies return to dust in death, but our souls soar, finally unshackled.

It was the only way I could get my head around the human horror and its reminders all around us, and find some semblance of hope that we could some day find our better angels, once and for all.