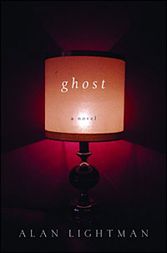 David Kurzweil’s life has taken a tumble. His wife Bethany left him eight years ago; he’s dismissed by his bank; he can find employment only in a local mortuary where he’s taken under the wing of aging owner Martin. Then, David sees something in the “slumber room,” where corpses are kept. “It’s a vapor. But more than a vapor.” It — an “intelligent” it — arises from a body. The vapor, the event really, is life-changing. Few take David seriously and those who do are pretenders.

Lightman’s novel is not about ghosts but self-discovery. It takes a cue from early 19th century American spiritualism: societies built around paranormal phenomena and psychics — Arthur Conan Doyle was a leading proponent. Even the surnames of the protagonists elicit the period: Gaignard, Mickleweed, Tettlebeim, Mewhinney, Pillbeam. Though Lightman, once an MIT physicist (and author of “Einstein’s Dreams”), gives the story Gothic syntax — there are vivid sections on embalming (“Careful not to rupture the vein, he lifts it up.”) — it hinges on David. And he’s only a marginally interesting figure.

“Logic is what holds it all together,” reflects David. “Without logic, anything could happen.” The “anything” does happen, leading to chaos in David’s realm. The rest is a search for clarification. Along the way are the impressionable and the skeptics. The “world underneath,” David decides, is “all in the details.” But why such labored navigation?