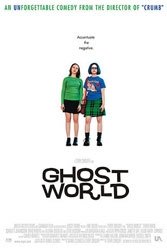 Terry Zwigoff reprises his love of Delta blues music (he directed “Louie Bluie” in 1985) in this bittersweet adaptation of Daniel Clowes’ graphic novel. Enid (Thora Birch, of “American Beauty” fame) is an alternative-girl who resents expectations. She’s also a high school artist who just failed art. Now, she can’t graduate until she passes a remedial class for what she calls “fuck-ups and retards.” Meanwhile, partner in crime Rebecca (a bored Scarlett Johansson) is a little too excited about adulthood. Rebecca aspires to an apartment and a job while Enid prefers daydreaming to the sound of her blues and punk records.

A cruel prank involving a personal ad leads Enid to Seymour (Steve Buscemi). Seymour is a total square, a middle-aged man obsessed with the 1920s blues scene who wears a lumbar support that looks something like a lady’s girdle. Social outsiders worshipping long-gone and kitschy world, Enid and Seymour forge an immediate bond. But Enid panders to Seymour for another reason — she’s responsible for the prank. Guilty, she sets up shop to find him a girlfriend. But when he finally snags one, the bombshells start dropping.

Clowes’ graphic novel is more saturnine than the movie, but edgy dialogue keeps the on-screen comedy serious. Few movies boast as good a soundtrack: Mohammed Rafi’s Bollywood rock and roll bopper “Jaan Pehechaan Ho” opens the film on a high, while a forgotten blues ballad — Skip James’ terribly sad, “Devil Got My Woman” — dials it back down. This is a movie for freaks and outsiders, for people who can’t stand how shallow the world’s become, for those convinced they’ll never be understood.