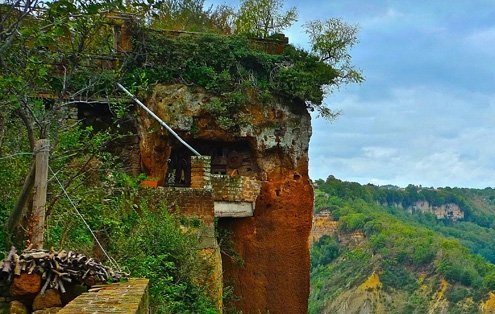 In a small town where much stays the same, what does "dying out" really mean?
T

he woman who feeds the stray cats is walking fast up the hill, head bowed into the brisk night of this central Italian village. “When this kind of melancholy gets hold of me,” she says, “I just need to get out and walk.” I’ve just locked the door to a mangy-hooded car that I inherited from a friend, an Italian who left her native land in search of a healthier economy. We are the only two people on this hill in what some people say is a ghost town.

An Etruscan tomb at the edge of the garden. That’s what a neighbor says is under the mossed-over rocks beyond his house. The Etruscans were big during the Iron Age, before the ancient Romans moved in and became even bigger. Someone who picks up on a certain kind of energy tells my neighbor the person under the rocks may have been some kind of priest. We scrunch our shoulders at the thought, unsure of where the truth leaves off and where folklore begins. But this is not what people mean when they say this is a ghost town.

It’s about 10 o’clock at night when the cat lady crests the small hill 1,000 feet or so above sea level and draws her nubby cardigan close around her body. The view is wide open to the northeast, tumbling down over medieval ruins and stone houses and into the valley, where a deep, light-speckled trough follows the course of the Tiber River as it winds its way down towards Rome. It’s the kind of view that, even half-cloaked in the dark, can soothe an agitated heart. A vista that, once the morning mist has cleared, unfurls itself over greens and yellows and hilltop towns and frost-tipped mountain peaks. And makes you dream a little.

I dream backwards in time. The drift of this place at night connects me to childhood evenings on a Caribbean island, where whistling tree frogs flirted noisily in the dark, where we kids chased fireflies with huge glass jars, where grownups waited out power cuts by chatting over candles lined up in the driveway. It is a slow, fragrant, crickety kind of drift that tends to soften personal dramas, tends to blur the edges of harsh memories that are not quite dead and buried. But this is not what people mean when they say this is a ghost town.

I have watched this community trudge uphill against prevailing economic trends, hoping to draw new business with its head-turning panoramas, its cool nights and its inexpensive housing. In another economy, another decade, the quiet prettiness of this town’s historic center might have led to a brilliant renaissance. But in this economy, the town has lost two cafes and two restaurants in three years. Recently, the only bank shut its doors, taking with it the one ATM machine for miles around.

Being called a ghost town isn’t necessarily a bad thing if you’re a medieval hamlet in central Italy. It has a certain rustic ring to it. But in the greater community, where people have bills to pay, children to raise and elderly parents to care for, the phrase is like a tremor running along the ground, one that you hope will stop before it gets to your gate. Because this is what some people mean when they say this is a ghost town: More factory workers threatened with cutbacks on the far side of the valley. More homes and storefronts with “For Sale” signs. More young people leaving the area in search of jobs. Think Rust Belt, U.S.A., only instead of a two-car garage, your neighbor has a grotto carved out of volcanic rock with an old wine press parked inside.

“Are we a dying town?” a local man wrote one day on Facebook. Are we? At last count, there were more than a thousand residents, a couple of churches and a school bus pickup. There are new immigrants from poorer countries and a few retirees from colder climes. There is still life in this town, yes, but the streets are haunted by the memory of prosperity and the specter of uncertain times. The experts tell us we’re out of the recession, but it may be a while before towns like this one know the difference. By then, there may be fewer people around to notice. Folks here tend to live very long lives, but those lives do come to an end, while hardly anyone is being born around here these days.

This isn’t what I usually tell people about life in a medieval village in Italy. People expect Quaint, they want Funny, they like a feel-good movie. But life here isn’t that much different from life in any other small town whose existence is being squeezed by hard economic times, whose troubles are dwarfed by more dramatic, headline-grabbing fates. Not much different, except for this: When you crest a hill at ten o’clock at night and look down at the amber-lit, stone houses and breathe in the cool, inky air coming off the oaks and olive trees, you’re thinking that this moment, in this very place, could be just enough to keep you going. To keep your head bowed into the brisk wind of these times.

Come daylight, the cat lady’s late-night distress will seem more mirage than memory. She’ll say, “Ciao-ciao!” with a gap-toothed smile. She’ll put a piece of foil under a rain gutter to catch water for the felines. She’ll walk out beyond the village to pull up wild greens. And after a couple of months, she’ll see a fat, pink ribbon on the front door of a neighbor’s home. A pink ribbon here means a new baby girl. A new life in a not-quite, maybe-never ghost town.