Ghost Dog, The Way of the Samurai 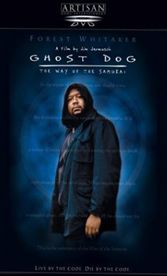 Ghost Dog (Forest Whitaker) is an inner city hit man who lives in a weapon-filled rooftop shack, communes with carrier pigeons (they bring him information), and behaves according to the Samurai code (“Meditation on inevitable death should be performed daily.”)

Writer-director Jim Jarmusch has Whitaker’s immeasurable affinity to thank for impressing eccentric credibility to an already-quirk premise. When Ghost Dog falls afoul of his Mafia employers (his pigeons are killed), he crafts revenge on his terms. As always with Jarmusch, resolution demands that satire and metaphysics collide. Rarely does a story rely so wholly on an actor’s confident personification of a writer’s whim. Jarmusch’s Whitaker possesses a lyrical brawn that falls into no known category. He imparts bits of wisdom to a French-speaking Haitian ice cream vendor and strikes up a docile friendship with a little girl called Pearline.

At times, he feels like an urban version of another merchant of honor, Spaghetti Western loner Clint Eastwood. But loners can be as limiting as they are intriguing. When Jarmusch finishes lampooning the Mafia and can’t get anything more from Whitaker, the movie turns into an awkward shoot-fest. Still, who but Jarmusch would use actors such as Johnny Depp (“Dead Man”) and Whitaker so thoughtfully? The movie hesitates without ever getting lost.