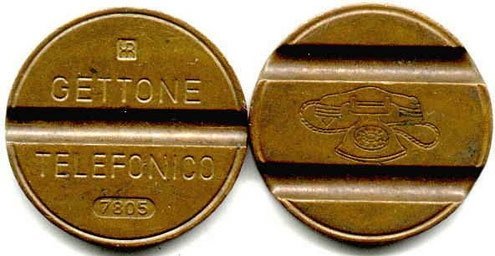 But do you have enough?
M

obile phones are like brunettes and text messages. There’s no before them. The quaint frustration that once dogged Rome long-distance callers is ancient history.

Like Julius Caesar, say. Or maybe looking before you leap.

When I first arrived in the city in 1975 international call meant dialing the number 170 (often busy), enduring an endlessly recycling “please wait” recording, booking the call, and then depending on an irritated operator’s never certain follow-through. Echoes and static went with the territory. The wait time played tricks with excitement, anticipation and nerves.

If impatience kicked in, you could go to the tiny but bustling phone center at the main post office building where you waited to claw your way to a desk, jotted down name and number, and awaited summons to one of a dozen coffin-sized cabins (“Vee-ner! Cabina otto!“) On a quiet day, American callers usually waited 15 minutes, while those desperate for Havana or Moscow brought a book. Rural Mexico required the patience to scan a voluminous tome of prefixes and a gift for prayer.

Making an out-of-city call from pay phones upped the adventure quotient. The city’s rude-looking public phones, located mostly in post offices or bars, took only double-grooved 50-lire tokens called gettone, sold like bus tickers in tobacco shops and kiosks. If sellers were tapped out or closed, you hounded passersby. Holidays were a bad time to call home.

The number of gettone also mattered. Often the operator demanded 20, even 50. Failing to feed the hungry phone swiftly enough meant dictatorial disconnection, often in mid-sentence, even if you’d already invested a dozen tokens. The exasperated snarls of cut-off long-distance callers, their fists still bulging with gettone, emanated from phone banks.

If telephones were too daunting (or too expensive), the central telegram office was half-a-block from the phone center and among the few places in Rome open 24 hours a day. Illuminated by slouching yellow neon, the narrow office served as a sanctuary for anxious, the heartbroken, and not a few vagrants.

Its relentlessly smoking clerks had the preternatural ability to decipher even the most self-defeating script. In a time before postal codes and faxes, telegrams to small towns often went first to nearby provincial centers, which then sent them on by car. Some late-night clients knew only the name of their hamlet. Those few who couldn’t write the clerks helped, pushing on the brackish-green telegram forms to telex operators, whose keystrokes sounded between bouts of coughing and laughter. Occasionally a haggard operator poked out to question address or content. Some clients haggled over word counts, leading to lively debate (one word more could mean a jump in price). The friendlier clerks suggested potential abbreviations.

To the United States, the cheapest telegram was the LT, or lettera telegramma, which in addition to the address gave a sender 21 characters (take that Tweeters), with a promise of delivery the next morning. Over the years I sent hundreds, most containing entreaties to potential employers or improbable confessions to disinterested women. I soon became a favorite of the desk’s night shift, which learned to read my hieroglyphic scrawl.

The centerpiece of process, whether in making a call or sending telegram, was waiting. The waiting in turn could produce emotional and intellectual refinements: Some calls were never made; some telegrams went unsent. The delay — bureaucratic, technological, or a bit of both — served at the behest of interstice, a wonderful if little-used word that characterizes the delicate crawl space between thinking and doing. Such space doesn’t exist unless forced to, giving impulsiveness a moment’s pause, and maybe even giving restraint its most fundamental context.

The evisceration of pauses makes impulse a sure-thing adjunct of convenience. No more 170; no more gettone; no more telegrams; no more waiting. Immediacy bypasses impulse control. Delivery is the moral of all stories.

Fortuitous restraint — what else to call it? — arose not only from the qualifying space between seeking a connection and getting one, but also from perceiving communication as a non-individual, self-conscious act, filtered as it was through operators and clerks.

Now, the guard dogs have abandoned the Styx, annihilating the annoyance of waiting while forgetting the quirky little virtues stitched into its folds.