Getting what you need 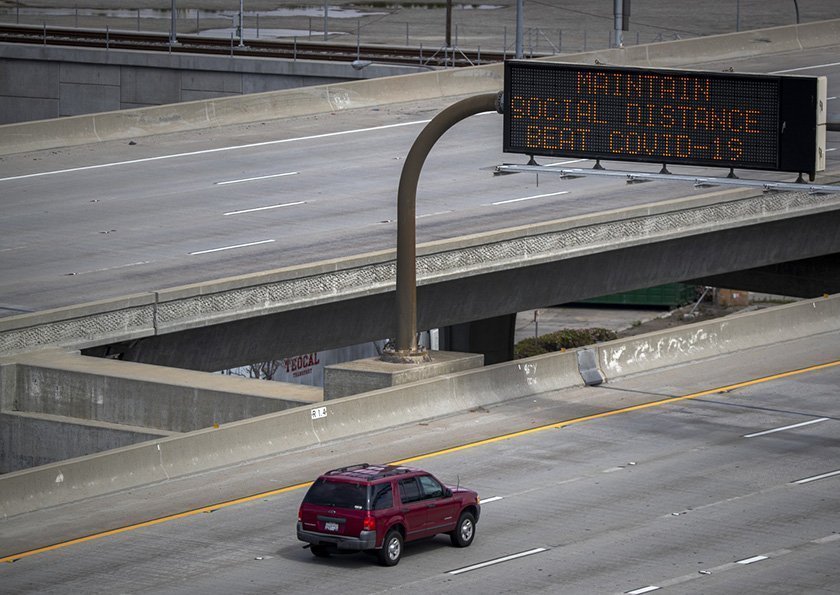 Packed Los Angeles freeways belong for now to an antediluvian past.
C

ertainty generally is illusion, and repose is not the destiny of man. • U.S. Supreme Court Associate Justice Oliver Wendell Holmes (1841-1935).

I remember Holmes’s line from my contracts class I took in my first year of law school, when I was in my early twenties. Though he was speaking about the law, his philosophical undertones struck a deep inner chord.

I attended that class the year my parents finally decided to follow through on a divorce. They’d been living apart for some time, but had now decided to make the break official. Sometimes divorce, like death, comes in stages, with ripple effects that last, and Holmes’s view of certainty, that it was uncertain, stuck with me. Only a few years after the divorce, my mother was diagnosed with cancer. She had good days and bad days. It had all the features of a rollercoaster ride, and that ride ended up lasting two and a half years. Watching over her was my first exposure to a situation similar to what many on the planet are now enduring in waves as the coronavirus pandemic unsettles their lives.

Intense anxiety, fear of leaving home, going out only to fetch absolute essentials like food and medicine, or for doctors’ appointments. Add to that list constant thoughts about mortality, deep reflections about just how everything will eventually turn out, not to mention unbidden memories of happier times.

Though I’m parked in my apartment, my cat my only companion, I don’t feel alone.

I’ve been here before, and some days I can’t believe it’s happening again. Yet this time it’s not only happening to me and my family but to all those I know, and all those I don’t. It’s happening all over the world. That, I suspect, is what makes the situation at once worse and better. Worse because there are so many people are sick. Better because we are all connected and able to share what is admittedly a terrible experience. Basically, we’re in it together.

Though I’m parked in my apartment, my cat my only companion, I don’t feel alone, at least not most of the time. Friends and family are just a text message or a phone call away. Zoom — the teleconferencing program — has kept me taking my multiple school classes daily. At times I’m scared, but then I remember that we’re all afraid. I feel a network of support the scale of which I’ve never experienced.

This virus, unlike my mother’s cancer, is forging collective bonding.

In Los Angeles, we came up against the virus later than many. We’d heard about it early in the year, but it felt distant. But on March 12, I was sitting in my class on campus, when I discovered that we’d all be switching to online schooling. It was odd but exciting in a way. I didn’t yet know the scope of what was happening. In addition to being a full-time rabbinical student, I’m also a part-time substitute teacher, and I thought perhaps I could substitute teach more often, since I’d have greater flexibility.

The next day, a Friday, I went to get my hair cut, an appointment I’d made a week before. Normally, I substitute teach on Fridays because it’s my only day off from being a student, but this week was an exception–in more ways than one. At the salon, I heard a national emergency had been declared. That was followed by the news that my school district (the second-largest in the United States) was ordering all kids from kindergarten through 12th– grade to stay home and study online. After my haircut, I headed to the market to stock up on food. It was swamped and I couldn’t even get a cart.

Three weeks have passed since the “new normal” set in and sickness is now set to peak , at least in California. Today I officially cancelled my flight to see my first cousin graduate from college. Everything here has been precarious. I have a friend who spent all week in a hospital recovering from the virus. My second-cousin is in the ICU on a ventilator. Another cousin’s child has had a fever for three days. Absorbing the news is like living in a daytime nightmare. Let’s not even get started on thoughts about the global economy.

The veil of certainty has been lifted, bringing us face-to-to-face with what truly matters.

Holmes was right. Certainty is an illusion, even in the times we call normal. Only in times like these does the veil of certainty lift, bringing us face-to-to-face with what truly matters, namely the fate of the people we care about and are connected to, our human community.

I’m among many who have called those they haven’t been in touch with for years — because I actually care about how they’re doing. I’m not the only one baking bread in my kitchen because it’s a simple act of creation. I’m hardly the only one writing on my laptop because it allows me to communicate with someone on the other side of the world.

Maybe intimacy with suffering can be a gift for all of us. My life was changed forever as a result of my mother’s long illness and death. Those hard years have led me to embark on a path I would never have dreamed of before her illness: I am becoming a Rabbi. My life may not play out as I’d imagined it, but I’ll be spending it helping people during the difficult times and rejoicing with them when things go well.

I’m convinced better times lie ahead – not only for me, but for all of us. Which takes me full circle from the words of Holmes to those of The Rolling Stones, who once sang: You can’t always get what you want, but if you try sometime, you’ll find you get what you need.