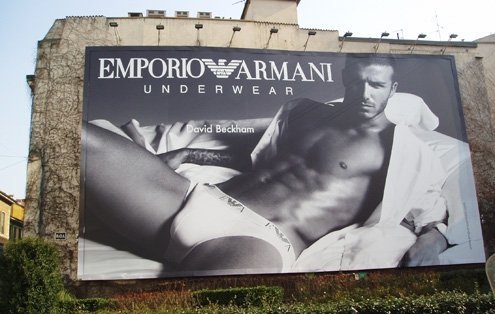 Please make sure the band or tag doesn't scratch...
L

ong before I even understood such things, I remember my mother berating my father because her brother always returned from his business trips with a gift of underwear. “See, he knows what makes a woman feel appreciated, ” my mother would say (sexy was not a word in her vocabulary).

Underwear seemed to me at the time a gift that wasn’t really a gift, more like socks. I should also point out that once my mother learned that her brother was also buying lingerie for another women during his “business trips” she never brought up the subject again.

Recently, my friend Laura headed for Montreal for a medical congress (and a shopping spree). Before leaving, she asked us what we wanted. Sexy underwear was my reply, and gave her the address of the “Chez Priape” store in Montreal’s Gay Village.

She returned to Italy the following week bearing gifts. Clearly her concept of what constituted sexy was miles from mine. While I was thinking a black jock by “Nasty Pig,” she presented us with something in sparkling neon colors that should have died during the Disco era.

I later learned (through exhaustive surveys conducted in my gym locker room) that many men don’t actually buy their own underwear. Underwear purchases go straight from mommy to wife.

Okay, I get it: it’s one of these weird heterosexual things — though the word “infantalization” does come to mind.

What’s still not clear to me is just what constitutes sexy men’s underwear. At least my friend Chicca was honest. “I don’t know,” she told me. “Boxers? Sip? [Italian for jockey shorts]. Men’s underwear is not sexy!”

But Christmas is looming. That means many men are likely to find underwear under the tree. With that in mind, here’s a list of considerations for anyone who wants to buy their favorite guy a pair of sexy underpants. I’m no expert, of course, but when did that ever stop anyone?

First, some ground rules. What goes around comes around. If your special guy ever gave you a frying pan or a crate of motor oil as a romantic gift I recommend buying him a five-buck three-pack of blue boxers or Jockeys and consider your Christmas shopping done. You can go home now.

Second: size matters. Underwear is usually sized small, medium and large (S/M/L), but waist size isn’t enough. You need to factor in booty and balls. If you’re not sure if he’s a S/M/L up front or out back, it might be time to do some research.

Third: support. Boxers are cool in the summer and great if you’re eager to increase your sperm count. Other than that, they offer little support. As larger women discovered when they burned their bras in the 1960s, gravity can be a cruel master. While stretch boxers offer greater support, jockey style keeps the boys in place and looking young.

Fourth: quality matters. A classic problem with sexy wear in general is low quality and the use of cheap synthetic materials. Generally speaking avoid self-styled sexy shops and polyester specials. Unless of course “tacky” is his turn-on.

Fifth: comfort rules. While women have been known to torture themselves stilettos, thongs and push up bras, most men won’t tolerate uncomfortable underwear. Just because they’re expensive doesn’t mean they’re comfortable. And if they’re not comfortable, he won’t wear them. I recently bought some Armani briefs with a brand tag at the back that feels like sand paper. How could a top designer put a tag there?

Sixth: style. No matter what marketing labels suggest, no underwear will turn him into something he’s not. Take a look at the kind of guy you have. Is he a classic Hugh Hefner silk boxers kind of guy, or a sporty David Beckham jockey shorts type? Jockstraps are generally suit hard-core types. As a rule fishnet usually doesn’t work unless you want him to look like an octopus fisherman hauling in the day’s catch. Thongs and T-bars may be standard issue for professional ballet dancers and strippers but for the rest of the male population they’re usually in the no-go zone. Which brings me back to the comfort rule. I can’t understand the concept of underpants deliberately designed to give you a wedgy.

Finally, you’re unlikely to go wrong with cool solid colors. In Italy, red underwear is a New Year’s Eve good luck tradition. But you can also go for the colors of his favorite team (the blue and black of the Inter soccer team, say) or a super hero motif (Superman, cartoon characters, the Tasmanian Devil or even camouflage). Steer clear of rubberized iron-on designs and embossed sayings such as, “Home of the Big Banana.” They broadcast insecurity and overcompensation.

Though designers work hard to convince us how to dress, underwear is something more intimate. If you know your partner you’ll probably know what works for him.

Incidentally, the Italian word for underpants is mutande, which literally means, “that which needs to be changed.” So consider clean and fresh as sexy — at least most of the time.