Getting out of Dodge 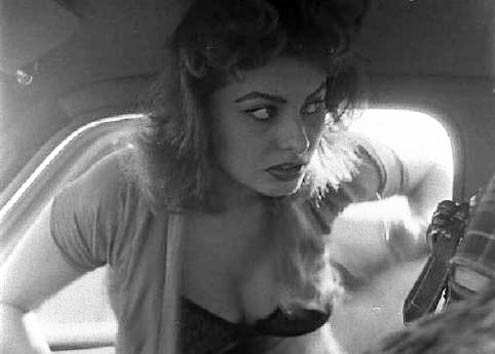 Rome's outskirts have long been the ticket to hearty food fare. Sophia Loren, 1955, in a photo by Federico Patellani.
A

t times it’s best to leave behind the chaos of Rome’s historic center and head for the hills. In this case the hills mean a jaunt to the city’s outlying areas, its periferia, or periphery, where the flavor and wholesomeness of Italian cooking can make a more notable appearance than in restaurants star-listed by guidebooks.

The aftermath of World War II produced a building boom that led to the creation of hardscrabble suburbs such as Centocelle, Mandrione, Pigneto, Fidene, Portuense, many of them made famous by the books and movies of Italian artist Pier-Paolo Pasolini.

I often find myself escaping the usual culinary itineraries, which I know by heart, and seeking delectable refuge in out-of-the-way spots you can often get to through public transport that is oddly abundant and quite dependable. Most of these places will give you a far warmer welcome than any Rome city restaurant. That said, here is my selective shortlist of Rome’s outlying gems:

Salotto Culinario Have you ever driven past the kitsch Castello furniture store on Via Tuscolana while headed out to IKEA? Well, inside this gaudy architectural mess is a treasure for both gourmands and design enthusiasts. Salotto Culinario is, as the name implies, a space where fine dining, excellent wines, and refined décor find a common space around plush sofas and hightech lighting — with deliciously good food as the centerpiece.

I come here for the panzanella with leek and burrata, the ravioli stuffed with cod, and the airy fried goodies, like arancini with pumpkin and smoked provola cheese. The Salotto offers a loyalty card for special events and tastings, and caters to both vegetarians and celiacs. Plus there’s free Wi-Fi and private parking.

Trattoria da Cesare Romantic dining al fresco under a leafy veranda? Check. Fried gnocchi with cacio e pepe sauce? Check. I could go on and on, but let’s just say that the bollito meatballs sprinkled with pecorino and pesto sauce are alone worth the drive out to this elegant trattoria in the southwest quarter of the city, a stone’s throw from verdant Villa Pamphili.

Come for classic cucina romana recipes, including well-executed offal dishes for the daring, and über-light fried anchovies served in a paper cone. Be sure to leave room for the dessert sampler I cesarini, or tiramisù served in a glass. The only negative is trying to find a parking spot in this narrow portion of Via del Casaletto.

Betto e Mary This Casilina stronghold has been serving boiled nervetti with sweetbreads and feeding cinema literati on paper table covers for half-a-century. Its hidden location in the now trendy urban decay of Torpignattara makes it popular both among locals and visiting families.

Rustic and informal, the (spoken) menu contains mostly traditional Rome and Lazio dishes, as well as quinto quarto (offal dishes). I like taking advantage of their outdoor patio, kick off my sandals, and enjoy coratella with artichokes, or pasta dressed with pajata, a delicate sauce made from lamb intestines. All happily washed down by romanella a frizzante red wine made by the owners. Open until late.

Mejo de Betto & Mary Gotta love Romans. The newest thing is opening an eating establishment and calling it “better than the other guy” (see above). Frugal and informal, Mejo is run by the same owners as Betto and serves traditional trattoria fare. What’s better than its namesake antagonist is the service (more courteous) and the ambiance (quieter).

The pleasant garden is a perfect place for a coppiette, which are jerky strips (sfilacci) made from horse and donkey meat. There’s also authentic carbonara, and its finta (fake) vegetarian counterpart in which zucchini is used instead of guanciale. Ask for the grilled meat sampler, and go heavy on the side dishes, like the barbecued mushrooms, homemade chips, or the spinach and potato flan.

At the end of the meal, the ciambelline biscuits, house wine and a wandering guitarist playing Roman ballads are on the house. If the owners add air conditioning to the first room, it’ll spell perfection.

Dai Lazzaroni My new favorite pizza joint is on the other side of town from where I live, but I hoof over gladly because the pies are stellar, the supplì (rice balls) ooze mozzarella, the beer is always chilled. And the pizzaiolo is hot!

Word of caution: The Appio-Latino district is chock with wide avenues, traffic, cheap clothing stores, and chaos. So, park on the Via Appia Nuova, cross the lush Villa Lazzaroni gardens, and, once at Da Lazzaroni park your derriere and prepare for a taste-bud fest. Run by the owners of Gatta Mangiona, another off-the-beaten-track pizza shrine, the emphasis is on gourmet Naples-style thick crust pizzas (try the carbonara calzone) delectable fried antipasti and craft beers, including some rare IPAs.

Il Podista If you like your pizza crusts thin, crispy, and topped with all-Roman sautéed cicoria and grilled sausage, head to San Lorenzo near “punkabbestia” land (the university area home to would-be anarchists and alternative life-style promoters). Once there, pour yourself a glass of Castelli house wine while waiting for your (non-anarchic but delicious) pie.

Amatrice Located in one of the last of the city’s remaining true borgate (working class neighborhoods), this family run restaurant is inside a remodeled farmhouse (circa 1850) where Garibaldi is said to have rested on his way to fighting for Rome during the Risorgimento. The high-beamed ceilings, huge fireplace and gorgeous windows add to the comfort provided by Antonio and Sabatino’s excellent food.

Dishes typical of Amatrice, in the province of Rieti, are their forte, which not surprisingly means the spaghetti all’Amatriciana is stellar. But don’t miss the house specialty: gnocchi ricci alla gricia, curly gnocchi made only with pecorino, guanciale and whole lotta love.

The seafood dishes and hearty steaks are top notch, as are the homemade desserts (try the crostata and sorbet). The outside veranda seats 100 and offers a reprieve from the summer sauna.