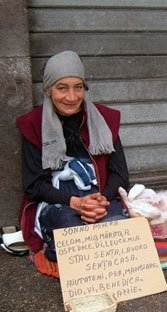 omeless breasts are the worst kind. You want to help in the worst way, but…

When I first got to Italy I worked for an organization associated with Caritas, the Catholic relief agency. I wasn’t very Catholic but I really liked giving relief. I’d always thought of myself as a good person.

In the first few weeks I had a hard time with the bus system and the language (I was headed for work in Bari but needed training first). I knew some words, such as “Si,” but not others, such as “Lei.” I noticed everyone was getting “layed,” at least around me. I considered this cultural.

One day I was sent to a distant part of the Via Tiburtina, an old road with a lot of new and ugly buildings. I would be going to a gypsy camp. In the office, everyone said “lay” this and “lay” that. I nodded.

I took a bus that ran along the Tiburtina. The trip took 45 minutes. When I met the man, Giovanni, in his late 50s, who was supposed to escort me to the gypsy camp I got “layed” again. He added the word “please,” which was confusing.

The first gypsy camp was a group of trailer-trucks, like the kind that might open up if you’re selling vegetables or wares at a local market. Except that there were beds inside.

I began to doubt just how much relief I could offer.

The first gypsy family I was introduced to by Giovanni was hostile. The members wanted to talk to him alone. It was suggested (with “lays,” naturally) that I move off to the side, while he apparently explained who I was and what I was doing there (I was a volunteer, distributing blankets — or that’s what I’d be doing in the next weeks, before Bari).

While I watched Giovanni talk, two teens ran by and grazed my arms. I whirled but they were already past me and laughing. They pointed at their chests, tugging at their T-shirts, and leered. I didn’t need Giovanni to tell me what they were talking about. I had (have) two. I don’t usually tug at my shirt them but I get the idea when teenage boys tug at theirs.

I recognized what sounded like the French word for head,”“tête” (which flirts with “tette” the Italian colloquialism for… but I’m getting ahead of myself). My “tête” — now plural — were “belle,” or so I was told. My good nature, suddenly aware it wasn’t the center of attention, became morbidly depressed.

Next, we went to the “encampments” behind the trucks. These were fairly depressing. Some families seemed to have grass farms. One man lived in a holed-out container. A man and a woman lived in a half-built hut-house that looked like the ground floor of a home no one had ever bothered to complete. We walked through a field about half-a-mile from a low income housing complex.

That’s when Giovanni grabbed my arm. We shouldn’t go any further, he said.

Why? I really did. I saw what seemed like another group up on a hill.

No. That I understood.

He “layed” me again, this time not-so-gently. The gist was, “We not cannot go up there.” Point taken.

But what was up there? I now resorted to excited hand gestures. Paws forward. Up! Hands forward. There! Quizzical look. I tried piecing these movements together so Giovanni wouldn’t think I was a swimming ferret.

That’s when (apparently exasperated) he told me.

The people up there, they were The Ones Without Breasts.

Sensa tetti is what I heard. (Senzatetto is what he said, but…).

I was startled but Giovanni was far more startled at my failure to understand. He kept pointing at his head and chest. To look at him you’d think The Ones Without Breasts also had no heads.

The Ones Without Breasts were, I gathered, the homeless. Or maybe their breasts were homeless. I felt like covering myself.

I imagined a whole tribe of urban Rome gypsies without breasts. I even wrote my mother, who told me life could be a strange thing (she’s good at that).

Language can also be strange, and wonderful. I did eventually learn Italian. Once in a while I’m inclined to shock new Italian colleagues by playing dumb and calling the homeless “senza tetti,” “The Ones Without Breasts.” I do this to get their attention. Flat-chested I’m not. It’s fun to see their faces.

Oh, and I haven’t been “layed” for years, at least not by my friends. That’s what you get for being informal.