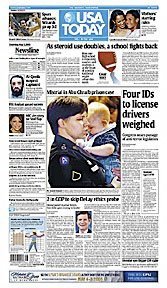 uring the recent papal death and election, a reporter for a major American daily newspaper was asked to file a front-page report on the kind of pope the Vatican might choose to replace John Paul II. The reporter, adrift in the speculation that overtakes such closed events, began by rightly listing a number of rumors commonplace in Rome conversation. Some said the new pope might be an African, to assuage fears of rising Islam. Others mentioned the name of prominent Spanish-speakers, because tens of millions of Roman Catholics are in South America. Still others persisted in mentioning the name of Josef Ratzinger, the pope’s trusted lieutenant and doctrinal watchdog.

The reporter mentioned these rumors to make a point: Rumor was all Rome had to offer.

But his editors were dissatisfied.

He could not make such assertions, they insisted, unless he attributed them.

Rightly troubled, the reporter asked just how he could document a rumor without entering into paradox and watering down his prose in a way that might make it seem maudlin and lacking in authority. After all, he was in Rome, at the Vatican, not his editors.

The editors were unmoved. Document the assertions or do not use them, they insisted.

What he did to bypass the dilemma gets to the heart of a central problem in current American journalism: It waters down insight to protect against error.

The reporter capitulated. The African rumor was pinned to an Italian journalist, Marco Politi, who is well connected, and an author, but a whirling dervish of splendid speculation. The South American rumor, pushed away from its Spanish connection, was placed on the shoulders of Brazilian president Luiz da Silva, who expressed “sincere desire” for what was called a homegrown pope. Comically, the Ratzinger candidacy was assigned to an Irish betting firm, Intrade, which had the German atop its short-list.

While editors got what they wanted, attribution, they did so by removing the reporter, and his newspaper, from any responsibility for insight that might not come true.

This is the Maginot Line of the new journalism. While porous and ponderous, it does its job in looking authoritative. The problem with the real Maginot Line is that German forces in World War I simply went around it.

Now comes news that the Pentagon reporter for USA Today, Tom Squitieri, has been forced to resign from his newspaper because he used quotations that were not his and not attributed to the news source that originally produced them. In writing about Iraq in March 2005, he reproduced a quote that had appeared in another newspaper in 2004. The quote was perfectly placed, and compelling, but he did not obtain it. Roughly, this is like writing a piece with the statement, “Thou shalt not kill,” but failing to note the comment does not belong to the author but the Bible.

Squitieri’s exemplary punishment comes as no surprise. Another USA Today reporter, Jack Kelley, was dismissed 18 months ago for fabricating whole stories. A number of similar cases have rocked American journalist since 2001.

What Squitieri did, said the newspaper’s editor, represented “a clear violation of our sources and attribution policy.” The editor, Ken Paulson, replaced Karen Jurgensen who was forced to resign as a result of the Kelley scandal.

While rigor is a typically American trait, and an admirable one, its downside is the policing zeal with which it is applied. When zeal becomes a mission, purges hang around waiting for a phone call. Rigor and the enthusiasm of enforcement become interchangeable as operative doctrine. And enforcement often gets risky momentum from work-place envy. People tell tales about those they dislike. They endear themselves to that most colloquial of verbs, “ratting,” which is to tell on others, a game on which all pre-adolescence and much of adulthood is based.

At the time of Kelley’s dismissal, I wrote several letters to major American newspapers not so much in his defense — though I knew and liked him — but merely to note the size of the glass house in which stony accusations of plagiarism were flying. For decades, reporters in the field used entire portions of wire dispatches to round out their reports. The news agencies furnished quotes and information that many reporters could not obtain on short notice. In England, where the tabloid press reigns in its own amoral world, whole wire reports were printed under the name of a local author. Ironically, the tabloids did this to suggest veracity. Evelyn Waugh got to this quite early in the novel “Scoop,” in which a no-nothing becomes an instant authority while in the field. Waugh’s black comedy is bittersweet.

But much of early journalism owes its strength to yarn, storytelling, and a creative mixture of information and opinion that collapses if forced into the tyrannical realms of exact attribution and narrative founded only on empiricism. Extremes of accuracy, while theoretically golden, assassinate the lyrics of any good story. Enthusiasm for accuracy, in turn, displaces the encouragement of reflection based on fact, but not beholden to them at all times and under all circumstances. It also diverts readers from a central pleasure: the enjoyment of good and provocative writing.

Many will argue that such writing can exist without made-up tales and illicitly borrowed quotations, and strictly speaking they are right.

Yet the problem is subtler. Insist on strict speaking at all times and you hoard journalists into a stockade. They can come and go as they wish, but eyes are upon them at all times. They cannot speculate because they may be wrong. They cannot arrange facts cleverly, or provocatively, because to do so can lapse into criminal transgression — the stealing or embroidering of information. Plagiarism is no longer an academic transgression but a journalistic offshoot of the failure to adhere to specific codes and policies.

“This is not a happy ending for anybody, but it’s a constructive outcome,” said Paulsen after Squitieri’s ouster.

What is constructive about dismissing a 16-year veteran journalist for committing “sins” commonplace for a century, but only selectively rooted out? An admonishment is potentially constructive, not a dismissal.

The concept of attribution, nearly unknown in England, is by its nature Puritan and anti-creative. It says, in effect, that acknowledgment is a fundamental moral imperative. Squitieri has lost his job not because he made something up or got something wrong but because, goes the official version, he failed to tell readers the true source of portions of his information (in fact, such purges have far more to do with industry envy than any love for readers.) Squitieri did not attribute the Bible; he possessed a comment for his own purposes. Never mind that his report was accurate and to the point, thanks in part to the words he “stole.”

Journalists can no longer narrate. The vulgar dictatorship of dumb images — explosions, smoke, verifiable havoc, and “experts” who explain their meaning in blunt seconds — eliminates the patience necessary to arrive at more astute and less verifiable deductions, which occasionally represent wisdom. Wisdom is not in vogue, only wholesale accuracy. And wholesale accuracy, are shadings forced loose, is not always smart.

No one wants to look bad. No one wishes embarrassment. Circulation is dropping. So one by one, you kill the messengers. And those you don’t kill you frighten, so that journalists place the act of ascribing a notch ahead of associative free-thinking, which helps give facts their framework.

Sadly, monks were the original scribes, monks, and they only took dictation. They were told abrogate risk and refute challenge. So again and again they copied the Bible.