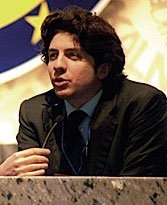 Marco Cappato of the Radical Party.
A

n old joke about European Union politicians suggests they possess the punctuality of an Italian, the flexibility of a German and the humility of the French. Such stereotypes depict the EU at best as a distant, lumbering and costly mechanism, and at worst as a menace to the decision-making powers of European citizens.

Skepticism about stalled EU reforms, worries about trans-national terror threats and concerns about unbridled immigration from new Eastern European member states will be on the minds of EU voters when they go to the polls June 13 to elect the next European Parliament. Millions of citizens from the 10 nations that joined the EU on May 1, including Poland, the Czech Republic and Hungary, will vote for the first time.

Since its creation, the Strasbourg-based European Parliament, with 626 members, has been a vocal but largely ceremonial body, powerless to affect the decision-making process of individual national states and their leaders.

It has been lampooned in the European media for its loud but ineffective pronouncements.

A growing number of younger legislators, however, want that picture to change. And such change, they insist, depends on the creation of a kind of United States of Europe, in which individual nations and their citizens have powerful unified rights, governed by the Parliament.

“When we say United States of Europe, it has an evocative strength, because people recognize it as a model of political simplicity,” says Marco Cappato, a member of the Italian Radical Party who has been a European deputy since 1999. Italy has 87 members of parliament; terms run four years.

“Europe needs … a Parliament and a chamber of state representatives that work together as a legislative body, like in the U.S. Senate. … [It needs] a common foreign and security policy and a government with the powers of an executive branch.”

Cappato and some others sense that the EU has failed to establish its own identity, which instead has been co-opted by the cultural and political tendencies of the nations it represents. As a result, it is less popular than a decade ago. “We used to look at the EU as something that could save us from our corrupt system,” says Cappato. “Today’s lagging support for Europe, even in Italy, may be due to the fact that Europe is looking more and more like Italy.”

All the more reason for the EU to extend its executive reach, says Matteo Costantini, the 28-year-old President of Giovani Europei, a grass-roots group that works to enlist youth in support of a united Europe.

“Europe must become a ‘super-state,’ with one foreign minister, one defense system, one market — separate states grouped into a federation,” Costantini says. “The principle is very simple: Everything that can be better done at a centralized level must be delegated to Europe. What can be better done locally must remain local.”

Debate about the EU’s draft constitution, which would give Europe its final institutional form, has dragged on for years. The new constitution, once agreed upon, is expected to shift some decision-making from national governments to the Parliament and the 25-member state European Commission, an arm of the EU executive branch headed by former Italian Prime Minister Romano Prodi.

Giacomo Stucchi, 35, who heads the EU Policies Commission of Italy’s Chamber of Deputies, the lower house, says that until power is decentralized member states “will remain the Lords of the Treaties,” all seeking “rings” of power.

“The ‘Euro-enthusiasts’ usually consider the idea of ‘being European’ only theoretically and not practically, without taking into account the obligations and the enormous compromises that follow,” Stucchi says. “The aim is to produce a written constitution with social, political and economic values, which will allow Europeans to regard themselves as a ‘people.’”

But can a written charter consolidate not only EU institutions but also promote a common European identity?

Cappato thinks the process has been hastened by terrorist strife such as the March 11 bombings that killed 191 people in Madrid.

“A European identity already exists,” he says. “Tragedies have unified Europe. When the bombs went off in Madrid the media were not mistaken in saying that Europe had been targeted, as we all felt part of a common fate.”

The introduction of the euro, the EU’s common currency, in 2002, has also helped — although Britain has steadfastly remained outside the euro zone.

And while the recent eastward expansion has been hailed as the EU’s first significant post-communist move, the enlargement has provoked resistance among European politicians who fear an influx of cheap labor and the availability of inexpensive goods produced in former Soviet satellite states. Subsidies owed to the new members have also provoked resentment.

“There will be tension, especially at the beginning, when some [richer] countries will lose a part of their EU funds in favor of the new members,” Costantini says. “But, with time, the economic, social and cultural advantages will be obvious to all. To economically strengthen the countries in difficulty helps create a larger and more competitive market for the companies of the more advanced countries.”

A strong supporter of enlargement, Cappato thinks the EU could eventually count Turkey, Israel and most Balkan states among its members. “It’s good that we’re expanding, but it’s too little too late,” he says. “Look at the current tensions in the Balkans, in the Middle East: Do we send a message to these people? Do we tell them that, just as it is inconceivable for us that a Frenchman in France or an Italian in Italy should suffer from any kind of discrimination, that [we want the same] for an Albanian or a Serb [in their countries]?”

The threat of Islamic fundamentalist terrorism, in the wake of the Madrid blasts, has pushed EU member states to reconsider how it deals with immigration and integration. Millions of Muslim immigrants live in European nations.

“The more Europe lowers its boundaries, the more it welcomes other ethnic groups and religions,” Cappato says. But when a society “meets the unknown, it is less inclined to behave courageously.”

He said politicians should work to enact wide-ranging and believable policies to “sweep away” public fears. “Otherwise, it will be our fears that will sweep away the EU.”

To meet the terrorist threat, Cappato thinks the EU needs a common foreign policy, which it does not have. On the contrary, he says, strong national policies nullify a European response. “Europe today is not able to do anything. Sure enough, Great Britain does its thing; sure enough pacifist France does its thing. But by themselves their policies are not important contributions one way or another.”

In effect, he says, Europe does not count. “On the Middle East peace process, on Iraq, on the war against terrorism … Europe is out,” Cappato says. Only a “United States of Europe,” he concludes, can gradually bring an end to national dissent and create tangible family ties among EU states.

No gold stars for Italy’s European parliamentarians, who have the worst attendance record in the Union. They make it to legislative sessions in Strasbourg less than 70 percent of the time (68.6 percent). The French are second worst at 79.54 percent. The Finns are the most reliable. Meanwhile, Forza Italia’s Marcello Dell’Utri is unlikely to help the Italian average. Already rated the MEP with the worst attendance record, he was recently sentenced to two years in jail for attempted extortion. (Suzanne Bush)

About the Author: Ariel David

Ariel David, 23, will graduate soon from the faculty of Sciences of Communication at Rome’s “La Sapienza” university. He has often combined his journalistic studies with freelance work for The Associated Press and for Israeli newspapers such as Haaretz and The Jerusalem Post. Born in Rome, David often dreams of practicing journalism abroad after graduating, only to wonder how he will ever bring himself to leave Italy. He has a strong interest in history, archaeology, astronomy and enjoys movies, science-fiction and most kinds of music. During periods of emergence from laziness he practices rock climbing and martial arts.