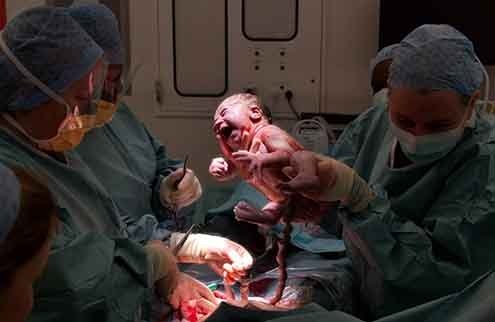 In the operating room, with so much at stake, it's important to know when not to test your limits.
M

edicine is a humbling profession. Barely a month into my clinical rotations, I’ve been privileged to share many intimate moments — the highest highs and lowest lows — with patients and their families.

At this point in my training, I possess two main therapeutic tools: a pair of ears to listen, and a heart brimming with empathy. The two can go a long way, especially in the hurried, harried world of the modern hospital.

During my first night shift on labor and delivery, I was humbled in a different way. At times you do things with the best of intentions and still come up short. I’m a medical student. I’m not expected to get everything right. But I’m also a perfectionist and hold myself to a very high standard. In my previous vocation, publishing, I’d advanced to a point that when someone asked me a question, I knew the answer. That’s often not the case now.

But my shortcoming that night wasn’t intellectual. My body failed me.

Around midnight, a very pregnant woman came in needing a C-section. As the only medical student on the floor that night, I was asked to scrub in for the procedure. I helped suction the fumes from the electrocautery and retract the skin as the attending and resident made their way into the woman’s abdomen.

After seeing several C-sections, it still amazed me how quickly the baby emerged. There were several layers to cut through —among them the skin, superficial and deep fascia, rectus muscle, peritoneum, uterus. The surgeons cut and burned with confident, swift motions. Once the uterus incision was made, the resident reached in, grasped the baby, and quickly corkscrewed her out. They clamped and cut the umbilical cord, and handed the baby to the nurse to be dried off. A few moments later I heard the most wonderful sounds — mom, dad, and nurse cooing over the new infant, and a healthy baby’s cry.

The doctors, though, still had work left to do. They had to deliver the placenta, ensure the uterus was clear of placental tissue, and then suture everything closed. As I watched the resident and attending stitching the uterus, I felt a twinge in my stomach.

“C’mon, mind over matter,” I whispered to myself.

I’ve seen plenty of major and minor surgery. Blood and bodily fluids don’t unnerve me. I’d heard stories of people feeling ill in the operating room, but I never expected it to happen to me. Surely I could overcome this.

But the twinge deepened to nausea. I felt myself flush hot, droplets of sweat forming on my forehead. Then dizziness joined the party. I knew with high probability that I would throw up, pass out, or both within the next few minutes. In that moment, I had to channel the rapid decision-making ability of the surgeons in front of me. I backed away from the table.

I slowly sidestepped to a nearby metal stool and started to sit down.

“Are you okay?” someone asked.

“Go sit down on the floor,” someone else said.

The tone was concerned. No one was angry. I’m sure they were thankful I’d had the foresight to leave rather than jeopardize the operation.

I walked the few feet to the end of the room and put my back against the wall. I crumpled onto the floor into a cross-legged position. Trying to keep from breaking scrub, I kept my gloved hands folded tight against my chest, in the sterile zone between my shoulders and my waist. I took deep breaths, in through my nose, out through my mouth. The suturing, of course, was still in full swing. I felt like a failure. Moments after I sat down, the anesthesiologist rushed over from behind the curtain. He waved an open alcohol wipe under my nose to revive me.

“I’m not sure if you can smell this under your mask,” he said. I could hear the apology in his voice.

Whether the blunted whiff of alcohol helped I can’t say. But his kindness did.

A few minutes later the nurse came over. Noting the sweat on my forehead, she brought me an ice pack.

“Do you want to break scrub?” she asked. “The gown is holding all the heat in.”

Reluctantly I agreed. I slowly stood up, yanked the blue gown forward to rip it off, and removed my bloody gloves. After I tossed everything in the trash, I sat back onto the stool, feeling a dogged commitment to remain in the room until the end.

The resident briefly looked away from what she was doing and saw me sitting there.

“Go!” she said. She was emphatic but kind. So I went. I left the operating room. Once out, I tore off my mask, blue hair net, and white knee-high booties. Frustrated and embarrassed, I walked back to where other nurses and doctors were charting on the computers. Another resident heard what had happened and sent me to the 24/7 café with instructions to get a bagel and ginger ale.

The food helped. Not long after, I was hustling to see patients in the triage area.

In retrospect, I might have prevented the episode by staying better fed and hydrated (hard to do when it’s busy, as it had been that night). I’ll keep that in mind for the future. For now, though, I need to put embarrassment aside and focus on what I learned. As one person said while I was sitting there on the floor, “It’s okay — everyone goes down.”

What matters is that you get back up.