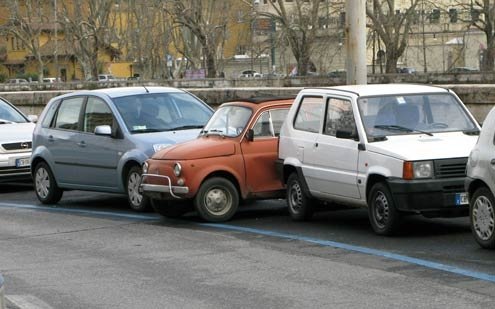 he milk delivery truck was going far too slow. While I consider myself a pretty patient driver by Italian standards, 39 kilometers per hour in an 80-kilometer-per-hour zone was testing my patience — even if we were on a curvy two-lane highway in Umbria. So I did the “obvious”: I passed the truck, zooming back into my lane before the oncoming traffic could smash into the front of my Yaris.

Today, I consider this a perfectly normal maneuver. Two years ago, after buying my first car and driving on this same road, I didn’t. Cars passed me going double my speed. I wondered if I was reading the speed limit signs correctly. (I wasn’t.) To avoid driving off into the abyss on either side of the unlit road, I continually yanked and released the car’s high beam switch to the point that it made my back sore. When I finally reached my destination, my harrowing trip had taken two hours longer than my GPS had predicted.

The memories give me mixed feelings when people ask me whether they should rent a car during their Italian vacation. On the one hand, I’m convinced that Italian driving habits are not crazy, despite appearances to the contrary. In fact, I am constantly amazed at how attentive Italian drivers are and how well they respond to obstacles, like stalled vehicles on the freeway. I think I am far less likely to get creamed by an inattentive SUV driver here than in the United States, which gives me great comfort.

That doesn’t mean that driving in Naples or the rest of Italy should be avoided. You just have to learn the system. Watch for motorcycles constantly, and expect other drivers to get far closer to you than they would in America. Try not to get mad when people “cut you off” (a concept that doesn’t really exist here) or don’t use turn signals.

Two years of steady driving have taught me to pick up on what Neapolitan drivers are plotting based on how they subtly inch their vehicles in one direction or another. I usually know what’s about to happen before they make their move.

But while it took me a mere two weeks to drive proficiently, getting to my current state of Italian driving Zen was a yearlong process. Traffic now unfolds before me like entertainment. I now dislike traffic lights, as all they seem to do in Naples is cause more backups by impeding the natural flow of things, interfering with my Zen world.

No matter how enlightened the visitor, imagining Italian driving isn’t possible until you try it (and perhaps wish you hadn’t). For example, though your rental may qualify as mid-sized in America or Germany, it may not fit through the medieval archway that stands between you and your hotel in, say, Orvieto. Similarly, driving along Amalfi Coast sounds lovely, but you may want to ask yourself how much you’ll be able to enjoy the view while dodging teenage motorcyclists whizzing around hair-bend curves.

I now prefer driving to taking the train. But would I recommend it to a couple honeymooning in Italy for two weeks? Probably not. That said, if you’re determined to make a car part of your Italian vacation, here are some ways you can make it easier on yourself.

Buona fortuna — and may the gods of Italian driving be with you.