Get me the janitor! 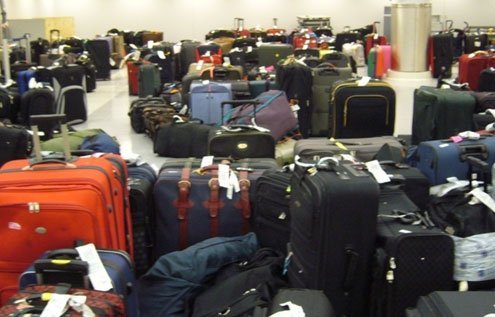 Never mind the recording, head for the airport.
I

’ve been down this road before, I know, but here I am again to tell you that Italian customer service just isn’t what it is in the United States. Not even close.

Yes, I’m aware that customer service isn’t perfect in the U.S. And yes, I also know I’ve brought this up before. Call me a complainer, but the truth is that I’m not.

This time around, I’ve decided to describe a few general situations so you can better understand what I’m talking about. Humor columnist David Barry would preface these kinds of remarks with, “This really happened…” Or, more appropriately, “This is happening every day.”

First off, the concept of “your call may be monitored for quality assurance purposes” is just not happening. Not in Italy. Magistrates busy taping politicians talking to lovers and crime lords chatting to buddies aren’t very interested in listening in to consumer worries. Nor are companies.

What that means in a nutshell is that the customers service agents supposed to be helping people with lost baggage claims or incorrect utilities bills aren’t usually very sympathetic, let alone accountable. Who’s checking on them? No one.

I once called an airport claims agent on behalf of a student whose baggage never arrived at Fiumicino. I got a recording telling me that all agents were busy and to leave a message, my call would be returned. Right, I thought, but I left a message anyway. Not once but twice. No call back.

By the third call (everyone was still busy) I got a hunch where my “recorded” messages were going. In the end, I basically bombarded every airport extension with calls. I even spoke to a member of the airport janitorial staff who finally transferred me to a woman named Chiara.

I began calmly explaining my problem to Chiara… until I overheard her having a second conversation with another operator. She was busy complaining about some idiota (her word) who’d called in an earlier complaint.

I asked diligent Chiara if she could please focus on my problem and look up my students’ claims number. In a magical nanosecond she told me her computer showed that the student’s bag was lost. Where? Somewhere. I didn’t even hear her punch in a keystroke. The bag was never found and officially declared lost.

But the student wasn’t giving up. On my suggestion, she decided to chance it, and made a trip to the airport. She found her bag sitting in a storage locker where it had been for a week.

Demanding to speak to supervisor won’t get you very far, either. Once, after arguing with a rude phone company rep, I asked to speak to a responsabile, the Italian version of a higher-up. He told me to wait, paused, put me on hold, and came back with a changed voice claiming he was the director.

Asking questions about the location of products in a new gourmet food giant in Rome recently led a cashier to tell my friends and I that we were being pesante — invasive or rude — by wanting to know so much. Yes, we were new there, and yes, we didn’t know what was where, but aren’t employees supposed to help inquisitive customers?

What if we’d been tourists, maybe non-Italian speaking ones? Would they have reacted similarly? I hope not. Italy is in a recession, not the best time (if there ever is one) to demoralize potential paying customers.

Sadly, the situation only escalated. As soon as the cashier thought we were out of earshot, she continued complaining and began mocking us out loud.

We complained and asked to speak to a manager. The store responded by sending down a twenty-something, which in Italy doesn’t mean a manager or boss. By the look on his face he was bored.

My friend insisted she wanted to file a formal written complaint, one that might actually reach the corporate level. Instead, we got an info.com email.

Next time I’m taking it straight to the… janitor.