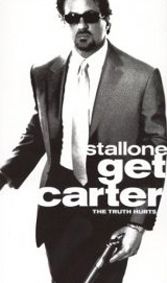 Call Sly Stallone “The Big Sulk,” because that’s about all he does here: sulk, avenge, preen, sulk some more, then avenge. Meanwhile, it rains. This remake of the Michael Caine classic just isn’t much good. Carter (Stallone) is a Vegas enforcer in Seattle trying to find out the truth behind his kid brother’s death. Doing that requires good clothes and murderous instinct, traits that Stallone honors beyond reproach.