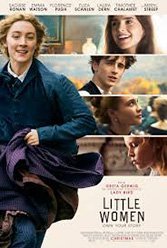 Louisa May Alcott’s “Little Women” has made the movie rounds for decades. Though set in the Civil War period, her 1868-69 novel grasped and groomed a time-honored theme: the relationship between sisters, in this case four of them.

Greta Gerwig is the latest Alcott adapter, and she’s clearly devoted to the character studies that give the novel its soul. In Gerwig’s take, the March girls are Emma Watson as Meg, the teacher, Saoirse Ronan as Jo, a writer (a thinly disguised version of Alcott), Eliza Scanlen as musically inclined Beth, and Florence Pugh as artist Amy, the least predictable of the bunch. Timothée Chalamet is Laurie, the adoring and observant boy next door who in some respects is in love with all of them. This is egalitarian casting when juxtaposed with earlier versions featuring Katherine Hepburn and Winona Ryder, each picked for their star power. Gerwig instead seeks to create an ensemble feel, and succeeds deftly.

The Pennsylvania-born Alcott wrote her book for the “young ladies” of her time, but Gerwig doesn’t shy from riveting emotional moments, pushing the story into adult territory. Yet at heart it remains classic Americana.

When the father goes off to war, the four sisters must take care of each other and the household, forced to mature by these unexpected circumstances. They can at times be mischievous, if not a tad malicious, but the overriding mood is one of compassion and generosity toward others, hopeful and moral in ways American self-portraiture depends on for inspiration. A letter from father both opens and closes the narrative, with Gerwig applying nonlinear storytelling from start to finish. Playing to a direct timeline would be too stilted, or so Gerwig reckons, waltzing her way through a patchwork quilt of episodes (catering to short attention spans).

As a director, Gerwig has yet to establish a cadence. Though eager to portray female doubt and (troubled) emancipation, her 2017 debut “Lady Bird,” a coming-of-age story also driven by an ensemble effort, rarely cut to the quick.

Here, Alcott’s prose and the cast’s emotional self-awareness unite to win the day. The March sisters are credible, both when strong and weak. They represent an early look at the young nation’s female fortitude, and Gerwig thankfully does nothing to detract from Alcott’s upbeat sermon on the virtues of maturity.

At one point, Jo’s editor Mr. Dashwood (Tracy Letts) tells her, “If the main character’s a girl, make sure she’s married by the end. Or dead, either way.” But the March girls don’t play by period rules. They’re not busy hunting husband trophies. They’re true to themselves and their goals, which is why the astute Alcott wrote her novel as she did, to empower. And Gerwig salutes her pre-suffragette boldness. (Consider one of Amy’s cannonades, to the unsuspecting Laurie: “… I’m just a woman. And as a woman I have no way to make money, not enough to earn a living and support my family. Even if I had my own money, which I don’t, it would belong to my husband the minute we were married. If we had children they would belong to him, not me. They would be his property. So don’t sit there and tell me that marriage isn’t an economic proposition, because it is. It may not be for you but it most certainly is for me.”)

Gerwig does take her share of liberties with Alcott’s original, enlisting Meryl Streep to play rich Aunt March, who wants one of the girls to come with her to Europe while pestering all of them to find wealthy fiancées. This is humor in its 21st-century ironic guise. But if Gerwig swears by a guiding principle it’s articulated by Jo, who is far less strident than Amy: “Women, they have minds, and they have souls, as well as just hearts. And they’ve got ambition, and they’ve got talent, as well as just beauty. I’m so sick of people saying that love is just all a woman is fit for.”

Here’s a movie about women that speaks to both genders while honoring keynote literature that few still bother reading.