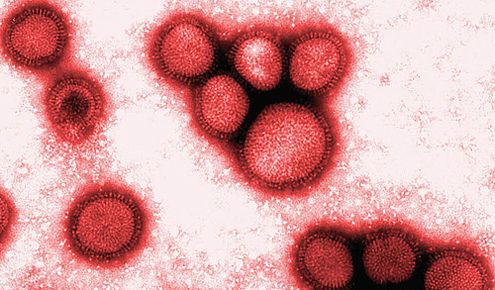 It knows what you think of it.
L

ate winter and early spring can be the worst part of the flu season. Unsuspecting citizens relax, convinced they’ve successfully endured the most hostile weather and eluded coercion. The flu revels in such distraction. It pounces with conviction.

Here, for those in pain, are tips on how to handle the flu. They are furnished by the flu itself.

Call a flu a flu.

Too often, the afflicted call the flu a “bitch” or send it to hell. This is ill-advised. A flu — influenza to you — has feelings. The flu will go to hell only when it’s ready. Advising it to travel early, in peak season for example, is to suggest it pay a higher fare. The flu, because it is influential, doesn’t like being cheated. It also knows and likes bitches. Do not offend the flu with casual remarks.

The flu will tell you when it’s thirsty. Do not attempt to drown it on the advice of your local sorcerer. Drinking plenty of fluids ruins the flu’s new shoes. The flu is an avid shopper. The flu dresses for you, its occasion. Do not rain on the flu or embarrass it. The flu wears Armani and D&G it has visited Fendi. It never carries an umbrella. Don’t insult the flu by soaking it randomly. It knows what you’re up to. Reprisals will follow.

The flu dated discomfort for years. But discomfort married fever. Which is when the flu intervened. The flu had affairs with both, wrecking their union. The flu uses aspirin to blackmail discomfort and fever into letting it have its way. The flu sits for hours, awaiting the tumbling down of aspirin, which it seizes. It then goes first to pain and then discomfort and demands sexual favors, which it receives. Briefly, both are distracted, and so are you. But giving the flu aspirin is giving candy to a mischievous baby. For the flu, aspirin is a date-rape drug.

Do not attempt to pretend you do not have the flu when you do.

The flu is sensitive to disbelievers. It dislikes those who work while it is present. This is a sign of disrespect and lack of hospitality. The flu was educated in the best schools, including Harvard and the Sorbonne. The flu attended debutante balls in Russia and Cleveland. The flu has been honored for centuries. It expects to be the center of attention, which is part of its visitation. Do not mistreat a guest.

Do not take antibiotics.

The flu is merely entertained by these drugs. It likes caplets and colors. It laughs at your ridiculous bombardments. It has alleyways and bars, discos and brothels: It knows how to protect itself. It parties with antibiotics, which are too afraid to do anything to it, fearing the flu might call one of its bully allies, cancer say, which in turn would shut down the whole city.

The flu appreciates friendship. It likes bridges between people, which is conducive to its sense of humanity and egalitarianism. It wants to spread the word, not keep it hidden. It has too much to joy to keep repressed. Share the flu and the flu will reward you with redeemable points and coupons of all kinds. It will shower your organs with extreme love. It will sleep with you forever.

The flu has heard it before. Every year, to the flu, is like the last, only richer. It has heard of its own demise for centuries. It scoffs. If only you understood (the flu tells its mistress) that it was your friend. The flu is you, a hint of decimation, a dose of humility. Humans are arrogant. Microbes are sultry. The flu will not be kicked. It will leave when it’s done, and not a moment before. The flu is always on the move, touching and feeling, insinuating and hammering, fondling and entering. The flu is at will. It knows what you think of it. It has heard and absorbed the insult of kings, and some it has killed. So lie still. It is not yet spring for the flu. You are a cog in its season of work. You are, for now, a very good host. Accept the role. Play the part. The flu thanks you in advance.