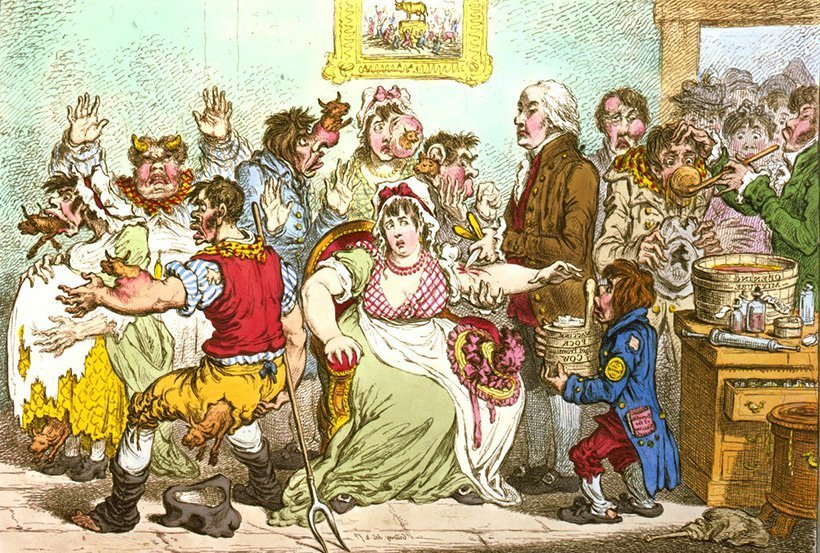 Once upon a time, inoculations and vaccinations inspired public fear, and plenty of exaggeration.
O

ne day late in 1969, in a back office of Creedmoor psychiatric hospital in Queens, I hiked up my skirt and pulled down my tights. My boss, Dr. Gideon Seaman, knowing I would soon be taking off for eight months in Europe, had brought along a huge syringe of gamma globulin and shot that horse dose of protective antibodies into the front of my thigh as I stood in front of him. I fell back onto a chair, passed out from the pain.

What country was he protecting me against? Italy. Why? Because, he said, it’s crawling with hepatitis. The locals would pick up the “infectious” A variety from eating their beloved mussels and clams, harvested from polluted waters, and cooked, if at all, too briefly to kill any lurking viruses. The “serum” B kind they got from mothers as mere tots, preparing them to pass it on as adults through needles and sex. Any guy I might pick up would likely have been infected since he was four. (If medical science had known about the C kind of hepatitis at the time — it didn’t — it would have also known that it was also big in Italy.)

Italy is one of those countries where you’ll want to make sure your tetanus vaccinations are up to date.

Today the shoe is on the other foot. Americans are much likelier than Italians to die of infections, mostly because of poor access to health care. And Italy has converted to farmed rather than wild shellfish. But former sins have left their mark on Italy. Several key vaccines reached here decades after they became standard in the United States. More cases of measles and congenital German measles are reported in Italy than in any other Western European country, with the number skyrocketing between 2016 and 2017 thanks to a know-nothing “No Vax” movement. And things may get worse: the measles vaccination rate for Italian toddlers fell steadily between 2010 and 2016.

My world-hopping clients often need to visit public travel clinics because such clinics have a monopoly on vaccines against yellow fever and Japanese encephalitis. For decades, dealing with this was a piece of cake: I’d write a prescription and an address, the patient showed up at the clinic any weekday between 9 and 12, and walked out a half hour later $10 poorer, with wisps of cotton taped to their arms. It was a poster child for public medicine. Now the party’s over – in 2013 my beloved vaccine givers started requiring appointments and stopped answering the phone.

Let me close with the strange case of tetanus. There are 400,000 horses in Italy, often roving city streets with police on their backs. Many of these healthy-looking animals gaily deposit manure laced with tetanus spores on the pavement, manure that then patiently waits for a passer-by to get injured so the spores can enter the body, wake up, and multiply. Italians over age 50 weren’t vaccinated as children, nor were most immigrants, so plenty of the people who show up in Italian Emergency Rooms with contaminated wounds ought by rights to receive not just a tetanus booster but also a shot of antiserum – a type of immune globulin hyper-packed with tetanus antibodies.

But as far as I know that antiserum has never once been administered, in any hospital, to a single patient of mine. Emergency room physicians go to great lengths to avoid giving it. They’ll tell patients that antiserum is no good two days after the injury (not true – it works even after three weeks). They’ll brandish consent forms that claim it can transmit AIDS (possible in theory but nonexistent in practice). They’ll say tetanus was wiped out long ago. Why those docs put up so much resistance is a mystery to me but it may be merely that the hospitals don’t keep the perishable antiserum in stock. An Italian team that studied tetanus prophylaxis in Naples’s public hospitals just a few years ago concluded, “Only 1.5 percent of the physicians correctly adhere to guidelines.” The upshot? More than a third of the cases of tetanus in the European Union occur in Italy, with 60 fatalities a year. So be forewarned: odd though it may sound for an otherwise proudly developed nation, Italy is one of those countries where you’ll want to make sure your tetanus vaccinations are up to date.