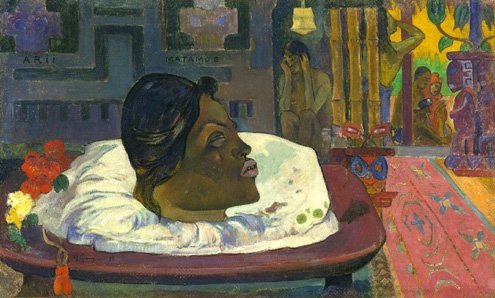 do not handle death well. Especially the death of a friend, a good friend who for five years contributed so much to our life in Europe.

Four years ago we returned to a little fishing village in France where we spent several summers with small kids. The kids grew taller and had their own kids. All of us finally came back to the village where we wore the summers together, like putting on a favorite sweater or comfortable shoes.

Serendipity found us an apartment in a house once owned by a man who, by age 40, was second in command of a prominent German steel conglomerate; at 55, he retired to France to become a Gerard instead of a Gerhardt.

Gerard was a hiker, boater, swimmer, cross-country skier (over miles of frozen, empty Norway), tennis player, photographer, world traveler, raconteur, and lover of who knows how many women. I counted six (or was it seven?) at the funeral — and I know several who didn’t (or perhaps wouldn’t) appear, out of pride. He went through women like a weevil through grits, and yet, there they were along with his daughter, son and separated wife (he never divorced, even when she had left after 30 years).

Amazing, really, how death suddenly collects so many people in one place, all with stories and anecdotes of the deceased, even bitter ones. His grieving wife addressed the crowd as “dear friends, and all the ladies.” He was a difficult husband.

One of his women remained a good friend after having rebuffed his misogynistic behavior — as did several, it appears.

But there was always another and another, some lasting a few weeks, some a few years, some off and on, and the last one believing that he would recover from a triple bypass and whisk her off into bliss for the remainder of their years. I think he may have said that to several others the day before the operation.

He was 73, after all. Or said he was. He fudged a little on his age and I can’t seem to find him on Google. That’s typical of Gerard. He remains a mystery still, except that we all felt we knew him.

He insisted that his chest pains were hereditary and that his mother had lived with them for 20-odd years. He mistrusted doctors and knew he could handle it himself, just like everything else in his life.

This time, the pains were too severe. We called our doctor, who immediately dispatched him to a heart specialist, who told him to go to hospital that very day, no waiting allowed. In half an hour we were at the Clinique St. Pierre, well-known in France for heart care. They wanted to insert stents, but found one totally blocked artery and two operating at seven percent efficiency. He had two days to wait for the operation and insisted he intended to return to his house until then, taking a taxi if necessary. The nurses were furious with him but could do nothing.

Personally, I would have stuck him with a good horse tranquilizer for those two days, but my husband reluctantly took him back to the apartment in the house we share. Don’t move, we said, don’t take the stairs, use the elevator, don’t go out, don’t lift things, and of course I heard nothing downstairs at 8 a.m. the next day and knew he had had no intention of following advice.

He returned three hours later. He said he was very tired but that the day in our little fishing village had struck him as “more beautiful than I have ever seen it.” I scolded him, of course, wishing I could have some effect, wishing my husband could talk sense into him, man-to-man.

We took him back to the hospital the afternoon before the bypass. He put on his pajamas, I touched his heart and said that all would go well, not to worry. He went to sleep and never woke up.

Why had he come back? To draft a will; to see his beloved village and sea a final time, to prepare for the ever-present “maybe” of operations.

A friend said, “Well, Gerard lived his life exactly the way he wanted, he did it his way, and he died the same way.” To which my grieving husband replied, “Yes, asleep.”

It is said that we choose our destiny, but how bereft are those left behind without Gerard’s charming self-deprecation, his stories of India, China, Australia, his string of women (I’ve befriended all), and most important, the pleasure of his friendship.

So be it. The taste of anyone’s death is bitter. Will sweeter memories of our friendship make up for that? I’m not sure. I’m not sure at all.