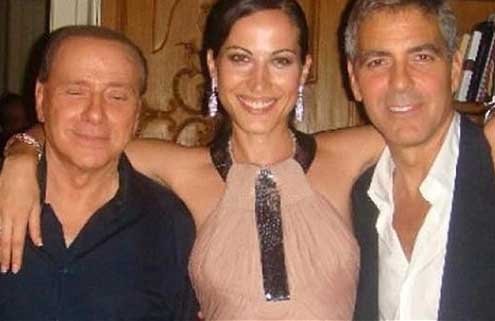 arvey Weinstein jerked off into a plant and it opened Pandora’s box. Every day, another one bites the dust and I find myself wondering how this would have played out in Italy.

If it had been Gerardo Weinsteinone who jerked off into that potted plant while his bespectacled secretary look on aghast. Mamma mia! Cosa stai facendo con quella pianta!?!

It’s hard to imagine since the rather portly Geraldo probably wouldn’t have felt the urge to fornicate with the foliage. He would have thrown on his wool coat, shined his Ferragamo shoes and followed our once esteemed prime minister to his bi-weekly bunga bunga parties.

The next morning, he would have returned to work, slapped his secretary on the ass and settled down to read some scripts. Although I’m just speculating since I can’t think of a single recent sexual misconduct headline in Italian film, television, business or politics.

I’m not going out on a limb here by assuming it happens all the time, but it’s hard to imagine any Italian male being brought low by accusations of sexual assault when Silvio Berlusconi escaped charges of sleeping with an underage prostitute. The same man who later went on television to declare his new thirty-something girlfriend had cured him of impotence.

And yet, after all these scandals and even more serious charges of tax fraud, Berlusconi can still recline in his leather throne and consider himself a serious candidate in the upcoming national elections.

I thought Italians were supposed to love their mothers?

I thought Italians were supposed to dote on their women as the earthy embodiment of La Madonna?

I thought Italians were tough, ball twisting Sofia Loren types who dealt with smart-mouthed boys masquerading as men the same way they dealt with a pot of passata di pomodoro — with a wooden spoon.

At least, that’s what my great grandmother would do. In a tiny Calabrian town where the donkeys almost outnumber the residents and everyone is my cousin, my great grandmother was legendary. Whenever there was a fight in the piazza, she was hitch up her skirts, grab her wooden spoon and rip the offending parties a new one. She didn’t care who was right or what they were fighting about, she would crack skulls and ask questions later.

And everyone called her a lesbian.

Fast forward five decades and your average Italian male would agree. Then he’d ask us who’s in the kitchen making ravioli while we’re out here telling stupid stories.

When my husband ran for mayor of our town, I quizzed him on the number of female regional presidents. He said there were none. I checked Wikipedia and it’s actually two. Two out of 20 and no chance in sight for a woman prime minister.

I looked at my husband’s campaign posters and felt a twinge of spite. Manciano has never had a female mayor and it seems it never will.

When I visited Italy in 1999, there was a game show where the dancing women descended onto the stage in a cage. Two decades later and the hosts are older, the pieces of ass are younger and my father-in-law gets away with saying: “A woman for every corner, in a house with no corners.”

Get it? Women are a burden! Hilarious!

I have my own selfish reasons for championing women’s rights. I am no Angela Merkel. I do not aspire to a career in politics. But I experienced my own little slice of inequality when I became an Italian citizen.

I wanted to add my husband’s surname to my own in what I imagined would be a quick and painless process. I did it more than half a decade ago in Australia with nothing more than a copy of my marriage certificate.

I approached the Birth, Deaths and Registry office and asked if they had the necessary forms. They didn’t. They never will because women are not allowed to take, add, subtract or multiple their surname in Italy. They are born with their father’s name and they will die with it.

I was stunned. In my own small and stupid way, I was experiencing discrimination… and it sucked. The man at the office told me I should be grateful. Until very recently, women weren’t even allowed to give their children their surnames. You pushed them out of your vagina, isn’t that recognition enough?

No, frankly it is not.

I imagine the men who made this decision were motivated by nothing more than the desire to cut down the amount of paperwork they have to ignore. Because you know how flighty women are. One day they want their husband’s name, the next they’ll be getting a divorce and changing back, only to want to take on their new husband’s name two years down the road.

Better to make them feel like they’re outsiders in their own family. There’s no smarter way to teach future generations of women their worth than by denying them the right to decide their own name.

Merry Christmas from the Detti family… and Elisa Scarton.