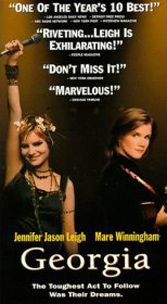 This often oppressive movie about sisterhood is redeemed by Jennifer Jason Leigh’s uncanny and perhaps unique ability to broadcast despair and the whining stages of its gravity-defying chaos.

Sadie Flood (Jason Leigh) looks up to her successful older sister Georgia (Mare Winningham), a popular folk singer with a family, children and a steady following, a stability the movie builds on to help sharpen Sadie’s jealousy. She not only lacks Georgia’s skills but envies the halo of calm above her head. Slurred by progressive self-loathing, Sadie overflows into drink, drugs, debauchery and barbed wire singing that comes off sounding more like ululation. She drowns before your eyes, a Jason Leigh specialty.

Director Ulu Grosbard works Jason Leigh hard and long because she’s the script’s scene-eating trump card, with a drunken and pitifully poignant rendering of Van Morrison’s “Take Me Back” as apogee or nadir, depending on how you measure patience. Whether Jason Leigh’s tour-de-force and Winningham’s sisterly sincerity are themselves enough to offset 115 minutes of frequent melancholy is questionable.

See it for Jason Leigh, who deservedly earned Best Actress honors from New York Film Critics Circle. Her real-life friend Winningham (who called Jason Leigh “the heart and soul” of the film) got an supporting actress Oscar nomination, while Sadie wasn’t mainstream Hollywood’s cup of tea. The film was written by Jason Leigh’s mother, Barbara Turner.