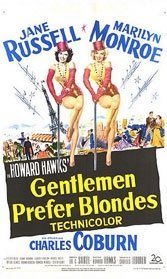 Feast your eyes on a sweet blonde gold-digger and a streetwise brunette from the wrong side of the tracks in a pitch perfect song-and-dance romantic comedy by Howard Hawks. That the blonde is Marylyn Monroe and the brunette Jane Russell only spikes the punch. Easy to say, “They don’t make’em like that any more,” but the more relevant question is why. The answer in part is a retreat from the unapologetic plunge into a one-way fantasy world, conjured up by men to be sure, but literally filled out by 90 minutes worth of woman-worship.

Diamond-loving Lorelei Lee (Monroe) gets involved with rich Gus Esmond, but Daddy Esmond sees through her rock lust. Down-to-earth Dorothy Shaw (Russell) has different ideas about men and love but friendship comes first. When the girl-buddies head to France on the “Isle de France,” Gus puts a detective on Lorelei’s case. Wouldn’t you know it that Dorothy falls for the gumshoe. All this tomfoolery comes with the dancing U.S. Olympic gymnastics team, Lorelei caught in a porthole, a caper-gone-wrong, and the double-climax of sex symbols Monroe and Russell both belting out “Diamonds are a Girl’s Best Friend.”

Russell’s verve and goddess looks (“the two and only,” as Bob Hope once quipped of her) overshadow Monroe’s ice cream sundae ditz. Still, it’s innuendo-laced good fun from times when sex and sexuality were dream-built around banter and dance numbers, and getting to second base meant dressing up, at least in the mind. Oh, and the movie’s men — aside from eventual animal husbandry — are irrelevant.