Gentlemen of the Road 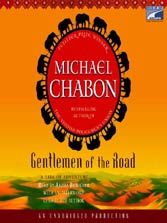 Clocking in at a scant 204 pages, it would be inaccurate to call “Gentlemen of the Road” Michael Chabon’s second published novel in six months. In fact, “Gentlemen” reads more like a novella, something to be read with the lights out or around a dying campfire. Surely this was Chabon’s intention, as he is the reigning master of High Genre Fiction.

But unlike his truly masterful “Amazing Adventures of Kavalier & Clay” and nearly masterful “Yiddish Policeman’s Union,” both of which used genre-play as a template for serious fiction (does the term make us cringe?), “Gentlemen” lacks a convincing plot and well-drawn characters. The action is set in Khazaria, a mythical Jewish kingdom wedged in between the Caspian and Black Seas, around the year 900 C.E.

The heroes — or “gentlemen of the road” — are a pair of horse-thieves, a huge black African named Amram and a wiry Frank called Zelikman. The book is almost nonstop action (knife fights, chases, cursing by humans and animals in various languages), although one gets the impression Chabon himself had only a vague idea of where it was headed as he was writing. The reader is left boggled by illustrious locutions like, “…despite his protestations of senescence, which were universally regarded as gamesmanship…” Chabon, one of our great novelists, could have benefited from a re-reading of the Elements of Style.