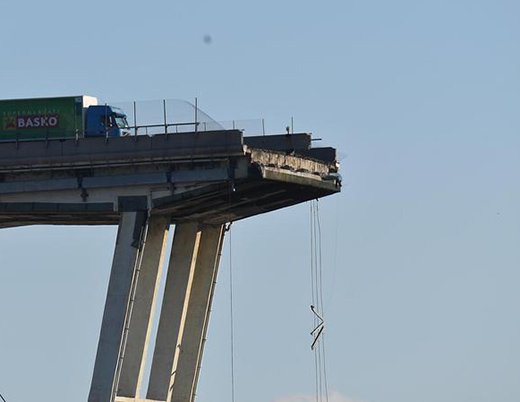 What's left of a Genoa bride, with nowhere left to go.
J

ohn Donne can grab summer calamities by the scruff of their necks and shake to account. “Send not to know for whom the bell tolls,” he wrote centuries ago, “It tolls for thee.”

August bells are particularly loud because many in southern Europe choose the month to retreat from routine and secure relief from stressful days. They run to rest.

So when a car-laden bridge gives out, as happened the other day in Genoa, the resting are stirred and Donne’s “thee” seems specific.

August gives pause to ask, “What if I’d been on that bridge?”, and to give thanks it wasn’t while paying requisite homage to the dead.

But the randomness of such events has a spooky feel no one can quite shake. Those who refuse or sidetrack any talk of their own mortality are more defensive. Those who wear religion’s rose-colored spectacles and death as a passage or a transition are poorly equipped to make sense of a snapped bridge. Skeptics fare no better, compelled to look at a piece of snapped roadway appended midair as if a limb torn from a body by a mine. The “thee” lie crushed below.

The bridge itself has no morality to answer to. It nonchalantly shucked the weight of its human cargo at gravity’s behest, perhaps weary of its untended-to manmade suspension. City officials will soon bear blame, since blame is the noisy flavor of every public post-mortem.

Yet among those that swear by 21st century functionality, Genoa is unforgiving. For them, transit is sacred. Planes no longer crash. Trains and cars are safer than ever despite occasional accidents. No one in the West builds a ship lacking in watertight compartments and lifeboats and calls it the Titanic.

At the same time, human sturdiness is more illusory than ever. Vulnerability to catastrophic events has changed little in 2,000 years. Superheroes are understandably more appealing than ever.

Randomness has become a peril in its own right, and Genoa is a good example of the unforeseeable.

John Donne’s stanza, updated, might replace a bell with a siren, with gunfire, with the sound of a slowing heart monitor, or with chronic melancholy.

Driving from here to there, a suspended slice of pavement cedes and all goes black. Next comes wreckage and rubble that HD imaging can make into the cruelest kind of art. Those given such scenes to absorb, a staple of TV viewing since 9/11, are seized by in inner turbulence deep enough to mute summer laughter.

“Poor bastards” doesn’t quite suffice in downtime August, not when mass media, pathologically keen to milk calamity’s appeal, harps on a scene beyond human repair. Seeing this, some take refuge in fatalism or resignation. Others can’t tune out, and watch until their anxiety grow fevered, affecting all they do.

Cyberspace connectedness produces emotion without end, including varying doses of sadness, solidarity and voyeurism. Those who see chance as a threat take reverse solace in the fissures of depression.

Millions now dwell in such cavities. What, they ask, is a life that ends without purpose or control? Flawed bridge, quaking earth, wobbly plane, cancer – are they all not part of the same ultimate bad news, akin to the tolling bell?

Life lived according to “happy norms,” partnership and the values of family, children, material success, should in theory conceal deeper worries, labeled as morose or moody. In theory…

In fact, there’s no getting around Donne. Happiness is capricious, after which comes human breakage, and after that a sense of toil and tolling. Human behavior is erratic. Then, suddenly, atop all this, a bridge fails and all seems unfair to the point of futility.

Donne’s stanza, updated, might replace a bell with a siren, with gunfire, with the sound of a slowing heart monitor, or with chronic melancholy.

Except that a bell sounds more soothing, even reassuring, but for the month of August, when pretending to know about the source of the sound is to open a hole no holiday can afterwards fill in, let alone walk away from unmoved.