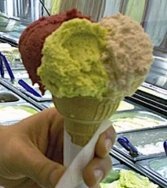 eonida Fassi remembers the ice cream cake that his father made for Adolf Hitler in 1938: strawberry and vanilla, topped with a black frosting swastika. “The day that Hitler came, the shop was closed. I came back from school, and they [Italian police] didn’t even want to let me in. My father came out and told them, ‘That’s my son.’ They were afraid someone would slip something in the ice cream,” the 72-year-old Fassi says, laughing and blushing about one of his first memories of the Roman gelateria (Fassi, Via Principe Eugenio, 65) that would become his own.

“Those were the times. We were the only gelateria in Rome, so we served all of the nomenclature,” he says, counting Benito Mussolini and Pietro Badoglio as clients, along with writer Gabriele D’Annunzio. “Their drivers would come and pick it up and take it to them.”

But when Italy joined the Allies in wartime, ending two decades of Fascist rule, Fassi’s had to reckon with depleted food supplies and a new political reality. The Fassi family rented the store to the American Red Cross in July 1944, which served ice cream to American troops in Rome until December 1946.

“They came with their trucks every morning to load the ice cream and deliver it to troops throughout the city,” says Fassi, pausing to straighten his wool cap and puff on a skinny cigar. “They made it with canned products that came from America. They only had chocolate and vanilla. I remember that it was good ice cream.”

The Red Cross began using a new blender that the Fassi family had bought before the war and placed in storage for better times. The Hobart Air Whip, built by an Ohio company, would revolutionize ice cream history by adding air into the whipping process and permitting the manufacturing of industrial quantities.

After the war, the Yugoslav engineer who headed up the Red Cross operation, Alfred Wisner, pleased with the efficient Hobart, had big plans for the Rome ice cream business and proposed carrying them out with Leonida’s father, Giovanni. But Giovanni Fassi declined. “We didn’t agree with industrialized ice cream,” Fassi explains. “It’s a bit like the difference between theater and cinema.”

Wisner went into partnership with one of Fassi’s workers, Italo Barbiani, and they founded Algida ice cream. “Now it’s [Algida] a multinational. Had we decided to go into business with them, I’m sure that none of us would still be there today,” Fassi said.

Il Palazzo di Freddo, commonly known as “Fassi’s,” has been a family-run business since it opened in 1928. Today, Leonida’s daughter Daniela and son Fabrizio, with his wife Annette, run the original store in Rome’s Esquilino neighborhood; his other son Giovanni, runs a smaller shop near Piazza Cavour that opened in 1996.

The Fassi family’s secret, fresh ingredients, hasn’t changed since 1928. A large cooler stores cartons of 50 eggs — which today come pasteurized — Fassi notes, along with milk — they’ve sworn by Parmalat — and sacks of sugar. They buy fresh fruit at nearby supermarkets.

Making the ice cream is the easiest part, Fassi explains: A machine mixes the milk, sugar and eggs. Then various ingredients such as chocolate and coffee are poured into the mixture. Water, sugar and fruit are mixed together to make fruit ice cream. “The sugar is what keeps it soft, otherwise it would be granita,” said Fassi, referring to the crushed ice, slurpy-style beverage usually consumed during the summer.

Customers most often choose cream, chocolate and hazelnut (more than 50 percent of what’s sold). And Fassi’s own tastes follow suit — cream, chocolate — and for a bit of personal flair, zabaione.

“I prefer to eat it as a meal in itself rather than a dessert. My favorite dessert is warm strudel,” said Fassi, who lives upstairs from the Esquilino shop. “If I don’t want to eat dinner, I cut off a chunk of ice cream sandwich and have a glass of milk and then go to bed. Or when I’m traveling, instead of a tramezzino at lunch, I’ll eat an ice cream. It’s easier to digest. I don’t even realize that I’ve eaten.”

People also flock to Fassi for its lighter take on panna. Use of the now-rare Hobart air whip helps. “It creates dense cream that seems like it’s been manually done, and at the same time, emits air that makes it lighter,” Fassi explains.

The original Hobart purchased in 1932 is displayed in Fassi’s front window. There are other signs of the shop’s proud but not pompous know-how in the gelato business: original marble top tables fill the spacious hall. At 800 square meters, it’s Europe’s largest, Fassi claims.

Out back is a courtyard with ivy laced against the walls and elegant wooden benches reminiscent of the early 20th century. “The logic is a bit American, the modern idea of self service,” Fassi said. “We are one of the few ice cream shops in Rome where you can sit down.”

Newspaper articles commemorating various anniversaries are neatly framed on the walls, along with special orders from the Italian Olympic Committee and Il Messaggero. An advertisement for “Telegelato Giuseppina” from 1934 stands out in the entrance. “‘Tele’ from Greek means ‘distance’, so ice cream at a distance was the idea,’ Fassi said. “My father gave his ice cream fantastical names. Giuseppina was his wife, and this was a strawberry, hazelnut and cream ice cream.”

Sending off ice cream was Fassi’s novelty of the day: For 18 lire, the ad says, you could send gelato anywhere in Rome; for 20 to 22 lire, throughout Italy; and for 28 lire, anywhere in the world. Many of their customers in 1934 were Italians living in Libya, then an Italian colony.

The export business continues to distinguish Fassi from the other 400 gelateria in Rome, Fassi says. “A couple of years ago, a Chinese man from the area wanted to take ice cream to China. So we prepared a little carton in a big box,” Fassi said, adding that the ice cream travels for up to 48 hours.

Fassi won’t compare the quality of his craft to that of others. He does volunteer that, in his view, only 10 of the city’s gelateria are truly good, adding that it’s all a matter of taste — literally. “Everyone has their preference. There are over 3 million people in Rome,” he said. “Human nature is like that: When I was young, there were people who preferred blondes, reds, brunettes.”

Although Fassi’s patrons come from throughout the city, it remains very much a neighborhood institution, and the neighborhood is now among the most ethnically diverse in Rome: On a Saturday afternoon, for example, a group of Chinese teenagers speaking perfect Italian lunches on large cones. Fifty-four of the sixty shops that share the street with Fassi’s are owned by Chinese, and the shop has immigrants among its staff, Fassi explains.

“It’s a place that doesn’t look at race or nationality,” said Matteo Carucci, a 33-year cashier who has worked at Fassi’s for 13 years, adding that the most important thing in this gelato institution has not changed. “The great thing is that the ice cream is always good.”

Other Fassi location: Via Vespasiano, 56.