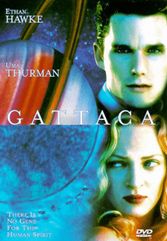 Andrew Niccol’s debut brims with provocative, well-tuned ideas — a thriller’s framework properly framed as science fiction. In a future where genetic engineering shapes sense and sensibility, the very plain and flawed human Vincent (Ethan Hawke), an “In-Valid” cleaner in a space center, “borrows” DNA from the paralyzed but brilliant Jerome (Jude Law) so he (they) can travel on a mission to Saturn. Niccol’s brave new world is called “Gattaca,” but even paradise contains paradoxes. Envy, deceit, paranoia, and daydreaming — all human foibles — cannot be entirely engineered from the so-called “Valids.”

That Niccol later wrote “The Truman Show,” “Lord of War,” and “The Terminal” is no surprise. He’s fascinated by the intensity of the human spirit and the ambiguous character of ambition. A Marxist would call this a handsomely futuristic drama about the class struggle.