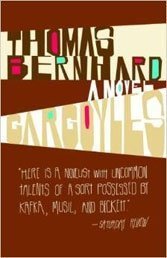 By Thomas Bernhard, translated by the German by Richard and Clara Winston

It’s hard to fully fathom (let alone absorb) the whole of Bernhard’s volcanic 1967 debut, a frothing crescendo of intellect and verbal ferocity that condemns fictional rules to irrelevance. For starters, here is a country doctor and his son, the latter on a break from his mining academy studies, who, in the aftermath of a murder, accompanies his father on his grim rounds — grim because the rural residents are marred by every kind of physical and psychological violence. The landscape is a Breugel-like canvass of the pitiable and the ailing who represent “the overwhelmingly sickness of humanity,” a sickness Bernhard both loathes but can’t do without, his defining paradox.

Such is the father-son narrative — the wasteland as seen by the doctor (“…my father meets more and more people in order to be more and more alone…”) — until the duo visits the gorge-surrounded castle of Prince Saurau, an enigmatic and paranoid nobleman who, it soon becomes clear, lives in the thrall of pulsating inner voices that excrete all manner of theories about the human condition. The instant doctor and son reach the castle Bernhard pushes the prince into a frenzied 150-page monologue that is lunatic but assured, disconnected but precise, a singular narration that honors the tangents of a mind gone wonderfully wild. “Would it be possible,” muses the prince, “that the air in here is metaphysical air?” Yes it is, and rarified air as well.

The mad prince is that rarest of literary servants, a human computer with anthropology, social science, art and politics all within his reach, and each one infected with the “the deathly weariness of human existence.” But he is also sentimental enough to enjoy his mind’s bear-trap, writhing in metaphysics like a child building a sandcastle. “For a long time now,” says the prince, “I have been concerned not with the idea of who will be on the moon tomorrow, but who will be the first to travel through the earth.” That’s what this novel is, a voyage of the mind into the mind, suicidal urges everywhere, and with it an understanding that there is no other side, no destination, and human territory beautifully condemned from the start (“The catastrophe begins with getting out of bed…”) In lieu of an endpoint, there is thought and more thought. “I find my consolation … in inconsolability, ” says the prince, and the inconsolable man is Bernhard’s archetype.