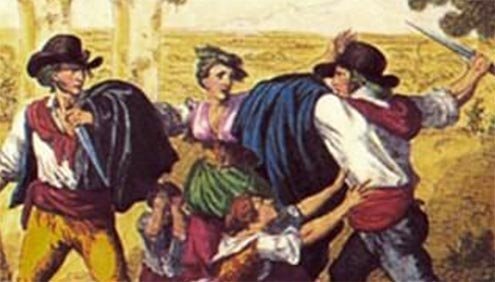 very family has its dark side. Claudio, one of my mother’s last living cousins, was busy telling me stories about my great grandfather Wenceslas, a Rome butcher and a restaurant owner, when he changed the subject to Wenceslas’s wife, my great grandmother Marianna. The name brought a scowl from my Aunt Donatella, Claudio’s sister, who was pouring tea at the time. Brace yourself, said Claudio. And I did.

“Your great grandmother Marianna immigrated to Italy with her parents from Spain when she was 19,” Claudio began. “This was the late 19th century and she went to work as a housekeeper for a local count whose wife had died of tuberculosis. She also played nanny to the count’s boy, who came to love her like a mother. Except that the count also had an older son by a previous marriage. His first wife had suffered from mental illness and was locked up in an asylum, which is the way it went in those days.”

“Everyone in the community knew the count’s older son had a violent streak. After a while, he got jealous of the relationship between his little half-brother and Marianna. One day, he came home drunk and tied his brother to a tree. Marianna heard the boy and ran for the tree. It was a trap. When she got there, the older brother pinned her down and raped her — all this in front of his half-brother.

“But your great grandmother always carried a knife hooked to her apron. She used it to slice and peel fruits and vegetables. When the older brother let go of her, she stabbed him. He died a few days later.”

Claudio paused. Rape was rarely reported in the 19th century and even more rarely prosecuted. Shame and silence were the norm.

“Marianna was tried but acquitted. The court ruled she’d acted to defend her virtue. The key testimony came from the count’s gardener who knew all about the boy’s violent tendencies and spoke on behalf of Marianna. The same day she was acquitted was the day she met the man who’d become her husband, Wenceslas.”

But why was Wenceslas in court, or near it? I asked Claudio.

“In those days, men would usually get together for a drink or to play cards. But Wenceslas had the unusual habit of going to the court chambers to hear out sentences. Court was a lively and rowdy place. The judge often had to call people to order. It was like seeing show without buying a ticket. Drama was free and there was no TV.

“Wenceslas was so smitten by Marianna that he decided then and there that he wanted to marry her. They had five kids, three girls and two boys. Your grandfather Cesare looked most like his mother. He picked up his knife skills from his father.

“Cesare learned how to skin a horse and prepare horse meat, a staple at the time. Knowing how to use a knife was essential in Rome. It was diabolically ambivalent instrument. You needed it for work but you could also use it as a weapon. Anytime anyone challenged you or offended you or your honor, out came a knife.”

Cesare didn’t mention the reason why. Most of Rome was dirt poor. Though revolvers and pistols had become famous in the gunslinger American West, only the aristocracy could afford such slick weapons. Local hand-to-hand combat was up close and usually personal.

“Rome was a city of knives,” Claudio continued. “By today’s standards, life on the streets was amazing. Bullies ruled the roost, but the word didn’t mean what it means now. The Rome bully was tough, arrogant and impulsive. He was a big eater and drinker, a kind of vigilante. But he was also a great protector of the poor and the weak. He was the guy who stepped in when someone’s honor was on the line.”

Claudio makes a good point. In the Anglo-Saxon world, the bully figure was originally associated with “virtuous violence.” The bully was an enforcer. For example, one famous 19th-century Rome bully named Romeo Ottaviani had a reputation for protecting prostitutes from violent pimps. Only later did the word acquire the sinister meaning it has today.

“The bully,” continued Claudio, “was basically ‘the law’ in Rome neighborhoods that were poorly policed and where residents wanted someone to settle a dispute and do it fast and with authority. That often pitted neighborhood bullies against each other in fights, like hardcore fans of different soccer teams in the same stadium. All the major Rome neighborhoods — Testaccio, Trastevere, Regola, Monti, Parione, Ponte and San Lorenzo — had their own armada of bullies. They were the soul of Rome at the time, its tough guys. They stood for a longstanding cultural conflict between people pledging allegiance to the pope while also wanting their own form of justice.”

Claudio’s mention of the Vatican is important. The pope ran Rome for centuries, losing day-to-day control only in 1870 as part of Italian unification. But Catholic Church influence continued for decades and remains strong to this day.

Claudio continued: “Wenceslas’s Osteria Cavallaro on Via delle Sette Chiesa was a haven for bullies, a kind of hangout spot. So much so that Pope Leo XIII basically gated the place, setting up drinking hours. Outside those hours, drinks had to be passed through the bars of the gates.

“In those days, knife fights were the rage, especially on holidays, or when people were drunk. The fights produced so many corpses that the local church set up a special room to pile them up, called the sfreddo, jargon for the ‘cold place.’ It took next to nothing to start a fight. It could be the way someone looked at a woman, or pouring wine with your left hand, which suggested betrayal. It didn’t take much.

“One day, a couple of bullies, one called Anselmo, or ‘Frankenstein,’ and Nando, known as the ‘Hunchback Dwarf,’ were playing cards at Wenceslas’s osteria. Nando was a tiny local loser. Anselmo was a tall nobody. They always argued over cards. But that day Anselmo was losing badly and decided to rub his hand on Nando’s hunch. According to Rome superstition, rubbing a hunchback brought good luck. Nando lost his temper and knifed ‘Frankenstein’ Anselmo in the stomach. Wenceslas carried him to the local hospital, called the ‘Consolation,’ which was later converted into a local police station, and it still is today.

“There was even a knife school on Via della Palombella, Scuola della Cicciata, the Meat School. The name made sense because the knife blade was wrapped in string (the safety), leaving only the blade exposed. That way you’d be sure to get to dig into the ‘meat,’ the stomach, of your adversary.

“Wenceslas knew knives out of both need and necessity, which is how your grandfather Cesare picked up on them.

“The truth is that the bully era didn’t really end until the advent of World War I and then fascism. For better or worse, they were persecuted relentlessly, with most ending up in jail for long stretches. After a while the bullies were gone, annihilated.”

To me, there’s no better “bully” dish than spicy penne all’arrabbiata, which dates to about 1900. It screams, “Eat these and you’ll see red!” (you’ll also need red wine to douse its heat). Rome’s bullies loved it. Here’s my version. The recipe serves four.

— Wash the tomatoes. Remove the green stalk and mark the spot where you took it out with an “X” (this will help later when you need to peel the skin). Fill a large pan with water. Bring the water to a boil and add the tomatoes, immersing them and letting them boil for a few seconds.

— Drain the tomatoes (keep the pasta water!) and put them in a bowl with water and ice. Remove the skin and seeds, and cut them into halves, quarters and finally small cubes. Set the cubes aside.

— Slice a red pepper in half, removing the seeds and making some strips. Pour oil (a fine stream) into the same pan and sauté a clove of garlic (whole or crushed) along with the pepper seeds. Stir them well, using a wooden spoon to avoid burning.

— Add the diced tomatoes and cook for a few seconds, again using the wooden spoon to ensure even cooking. For thicker sauce, add a few tablespoons of tomato sauce. Season the mixture with salt.

— When it’s cooked, remove the garlic. Meanwhile, boil the pasta using the same water you used to boil the tomatoes. When the pasta’s ready, drain it and add it to the pan containing the sauce.

Consider yourself a bully.