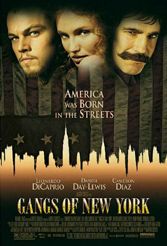 If size matters, this is a grand tale. The premises are flawless: the filth and glory of mid-19th century New York, box office heroes (Leonardo DiCaprio, Cameron Diaz, Daniel Day-Lewis), and a director who lives for movie history and New York’s, Martin Scorsese. So why does the undertaking fall short? For starters, too large a canvas overwhelms color itself. And Scorsese is too in love with his story. Amsterdam Vallon (DiCaprio) heads for the rough Five Corners section of the city to avenge the death of his father at the hands of Bill “The Butcher” Cutting (Day-Lewis). Meanwhile, he falls for pretty pickpocket Jenny (Diaz). Day-Lewis, thrashing around like a poisonous serpent, locks in early and never lets go. (See him in “There Will Be Blood,” which carries the theme further.)

Scorsese also makes fabulous hay with the visual scent and violent convulsions of the pre-Civil War period. What’s missing in the hubbub is credibility. While all looks good, the movie’s inhabitants feel like caricatures from a cartoon history.