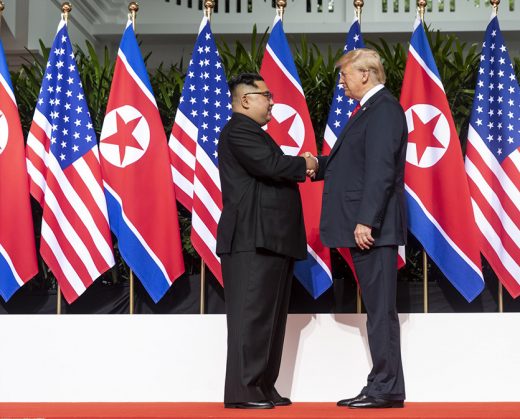 Kim and Trump are dancing, but the music keeps on stopping.
T

he North Korea negotiation show is back on the road, with the latest developments in the Donald Trump-Kim Jong-un saga eliciting more peculiar questions about how this administration views foreign policy. On the one hand, President Trump seems trapped in a traditional cycle of talks followed by stalling, a pattern than has plagued previous presidents. On the other, Trump’s and Kim’s oversized personalities, and their very public involvement in the diplomatic process, make it hard to assess just where the talks stand. Their supercharged rhetoric and the attention it generates make a case for the “great man” approach to international brokering.

These competing visions of the negotiations also highlight two ways of reading the Trump administration’s intentions. The first view suggests a continuation of traditional U.S. foreign policy (albeit with a colorful leader). The second suggests an aberration.

Yet the return to talks is an encouraging development. Trump has suspended the process between the two countries after Pyongyang failed to make sufficient concrete steps toward denuclearization, the key ingredient in the historic Singapore summit between the two leaders. The process got back on track after North Korea made a series of thawing gestures toward Washington. These included a successful meeting between Kim and South Korea President Moon Jae-In and Kim, a move that suggested the process was moving forward.

Absent Trump, the current situation would likely mimic that of any previous administration, with diplomatic engagement yielding a roadmap.

But now, as the negotiations move from high-level guidelines to the details, Kim has begun dragging his feet. In 2008, the Six Party Talks negotiations lost momentum when the verification of North Korea’s nuclear program became a stumbling block. Today, notwithstanding path-breaking trips and meetings by Trump and Secretary of State Mike Pompeo, progress has similarly stalled. Again, technical considerations have had a breaking effect. While Pyongyang has made symbolic goodwill gestures such as the return of the remains of an American serviceman to the United States, it has yet to take any steps that would inhibit its long-term nuclear capabilities. The country’s most recent promise to dismantle a missile site has drawn yawns from non-proliferation experts.

Even some of the innovations in the Trump administration’s approach toward Pyongyang have been little more than improvements or extensions of existing foreign policy tools. While Trump has presided over a major increase in economic pressure on North Korea, the move wouldn’t have been fully out of place under a previous governing team. The administration’s sanctions on Chinese entities supporting North Korea, which previous presidents considered risky, were circumscribed and carefully targeted. Though aggressive, they were hardly the acts of a reckless leader. In fact, some of the sanctions broke with this presidency’s unilateralist proclivities and could have been the work of a president who extols international organizations. Trump even imposed new sanctions through the notoriously obstructionist UN Security Council, coaxing Beijing and Moscow to buy into Washington’s “maximum pressure” strategy.

Such an anodyne summary of the past 18 months of U.S. North Korea policy, however, would only hide the real story. Despite pursuing an outwardly conventional policy course — and running into conventional pitfalls — this administration has hardly been traditional. Throughout his tenure, Trump has regularly tweeted schoolyard taunts at Kim. Earlier this year, the administration withdrew its nomination of Dr. Victor Cha as Ambassador to South Korea after the scholar and former government official expressed open disagreement with a potential “bloody nose” strategy. Under this proposed course, the United States would use preventive force against North Korea with the goal of showing U.S. seriousness and deterring the Kim regime. Any such “bloody nose” attack would obviously vex the more judicious multilateral UN Security Council sanctions approach. Finally, the Singapore summit was an extremely high-risk strategy. But Trump pursued it anyway, maximizing media coverage while ignoring alternative courses of action furnished by experts.

The recent anonymous “New York Times” op-ed piece by a senior Trump administration official and journalist Bob Woodward’s reporting in “Fear: Trump in the White House” offer a tentative answer. Though much of the coverage of the op-ed and Woodward’s book have focused on specific revelations, stories of advisors hemming in, ignoring, or even working at cross-purposes to president’s wishes are telling. They offer strong lessons in bureaucratic politics. In the picture that emerges, while Trump is able to voice outlandish ideas, the policy that ultimately emerges from the bureaucratic jostling is conventional.

In terms of North Korea, the most complex decisions requiring the most expertise have been both the most shielded from Trump, and the most predictable. Instead, those that require the most personal touch and the fewest intermediaries have exhibited his imprint. It may be tempting to try to view the North Korean situation, a high-risk multilateral process, as separate from the peculiarities of the administration. But, perhaps sadly, it ends up being this White House’s most gossipy documents that shed light on such a serious foreign policy priority.