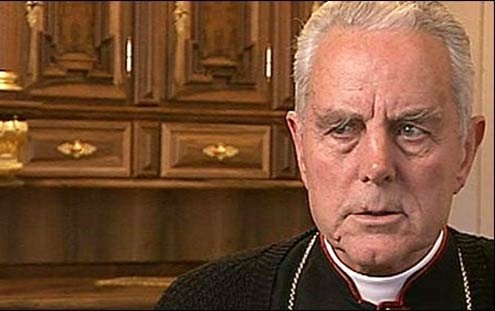 Williamson: "There was not one Jew killed in the gas chambers. It was all lies, lies, lies."
R

ecently I was having lunch in the Roman ghetto neighborhood when I overheard a conversation between two elderly men. “This Ratzinger is turning back the clock,” one said, “he’s making Wojtyla roll over in his grave!” It’s a popular sentiment these days, what’s called a “luogo comune” in Italian.

Pope John Paul II is rightly remembered as having made giant steps toward reconciliation between the Roman Catholic Church and the Jewish people and having worked to reverse the centuries-long animosity at the core of Catholic teaching stemming from the accusation of deicide.

But it was under another pope — John XXIII – whose Second Vatican Council took the earliest modern steps toward renewal, with the Jewish question a key aspect. Sure, John Paul II was the first pope to enter a synagogue and visit Israel, but he also compared Auschwitz to Golgotha and allowed a huge cross to be erected in the death camp, leading to what some call the “Christianization of the Holocaust.”

In fact, it is in the shadow of this cross that James Carroll, a former Catholic priest, chose to begin his book “Constantine’s Sword.” “How did this get here?” the author asks, plunging into a 600-page history of hairy Vatican-Jewish relations. All told, perhaps the difference between the current pope and his predecessor is not as great as many of us would wish.

But what can we expect? Popes have opposed modernity every step of the way. As the papal empire crumbled to the size of the tiny patch of land it stands on today, Pope Pius IX in 1870 claimed he was a “prisoner of the Vatican.” He fought Jewish emancipation just as he fought Italian national unity, making official the doctrine of infallibility, which was meant to discourage Italians from participating in the democratic process of their young state. Anyone who voted was subject to excommunication. His papal successors didn’t set foot outside their stronghold for 58 years to protest the secular state outside.

Nonetheless, like most people, I was shocked when I read the recent headlines: Pope reinstates Holocaust-denier. I followed the story closely, including widespread condemnation of the papal maneuver. English Bishop Richard Williamson’s public pronouncements (“There was not one Jew killed in the gas chambers. It was all lies, lies, lies.”) disgusted me. At the same time, I was no longer surprised by the Vatican’s cynicism, even if I can’t always explain it away to myself.

After all, the Vatican’s timing was perfect. What better moment to publicize its latest effort at unification than the window of opportunity between Israel’s Gaza Operation — when anti-Jewish sentiment was running sky-high — and International Holocaust Remembrance Day? The Church might have chosen ferragosto, when the news probably would’ve passed by unnoticed by all but a few hardcore bloggers — at least in Italy. Media backlash would’ve almost certainly been tamer. Well, so much for reasonable assumptions.

In the face of a presumably expected outcry, the pope back-peddled toward a solution, first by assuring the public these were really “internal affairs,” then by repudiating Holocaust denial in a general sort of way, and most recently by professing ignorance of the bishop’s views (they have been accessible on his website for years) and demanding that he recant them.

Unsurprisingly, the bishop has held fast to his denial, saying only that he regretted causing the pope an inopportune disturbance and promising he would “review the material” on the Holocaust.

What is the point of having the bishop recant? Admitting he was dead wrong about the persecution and deaths of millions of Jews at the hands of the Nazis and their collaborators after years of staunch denial would only make him look even less credible than he does now. It would be obvious that he had been strong-armed by his superiors, and anyone could guess that beneath the shiny surface of political correctness he still repudiated what the rest of us call history. Perhaps it’s better that he sticks to his views. That way we know exactly who he is. Which, I suspect, is part of the problem.

Let’s say — for the sake of argument — that Bishop Williamson goes on record as accepting what we call the Holocaust. Let’s say he embraces it “whole hog,” with no ifs, ands or buts. What then? Would anyone believe he’d suddenly stumbled upon some missing “proof”? Or that he’d been illuminated from above? What about his other fantastical claims, that 9/11 was engineered by the American government for example, or that there’s a Judeo-Masonic plot to rule the world?

No. Such backtracking — in sports terms — would represent little more than savvy fielding, a sliding catch in deep right-field, a game-saver in the bottom of the ninth, bases loaded and Pope Benedict XVI on the mound. Game over.