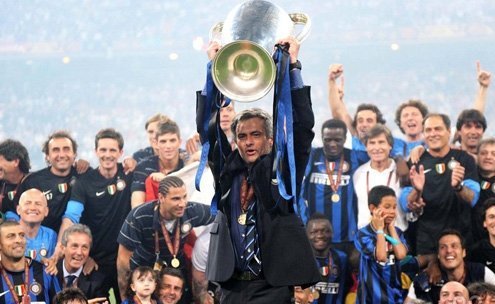 Since Jose Mourinho's Inter squad won the 2010 Champions League, the team has fallen on hard times.
I

nter Milan is among the most decorated teams in Italian history, though its recent play and financial woes have done nothing to shore up the club’s reputation. The team finished fifth in the 2013-2014 Serie A season and eighth last season, failing to secure a spot in either the Champion’s League or the Europa League and ruining any chance to tap into the multimillion euro revenues associated with European cup play.

Well before that, Inter’s finances were troubled at best. Earlier this year UEFA fined the club €20 million for breaching Financial Fair Play rules intended to stop teams from spending more than they earn. Inter also agreed to report a deficit of no more than €30 million euros for 2016 financial year, another limit intended to reign in irresponsible spending.

The team was off to the races in June, spending €30 million to sign Geoffrey Kondogbia, a 22-year old midfielder with experience limited to the French league. That’s right, a midfielder for €30 million. More high-profile signings followed, including the likes of Montenegran Stevan Jovetic and Brazilian Joao Miranda. Croatian star Ivan Perisic may also be added to bolster Roberto Mancini’s team before the transfer window shuts.

Given its fragile budgetary status, where did Inter get the money? The €35 million sale of Mateo Kovacic certainly helped, but the real recipe was the team’s use of an insider practice known as a “loan with obligation to buy,” known in Italian as a prestito oneroso con obbligo di riscatto. The prestito oneroso is the up-front payment the receiving club makes for the loan; the obbligo di riscatto, the onerous part, places an obligation on the receiving club to buy the player outright at the end of the loan, usually one year in length. Excluding Kondogbia, a number Mancini’s major additions have been purchased using this back-weighted formula. Jovetic and Miranda will cost €3 million apiece to loan this season, not including their wages. But Inter’s true burden will come next summer, when a €30 million bill for the outright purchases comes due.

Yet these kinds of loans are very much a product of the Financial Fair Play era. They’re the backbone of a mechanism that allows clubs to bypass immediate budgetary constraints in hopes of garnering enough subsequent revenue to offset the deferred payments. While installment plan payments are nothing new to football, Inter’s back-heavy use of it newer, and trendier. But it also places an enormous amount of risk on the coming season.

Whether Inter’s investments will pay off remains to be seen, but it’s hardly the only Serie A team with question marks. Fresh off four straight domestic titles and a Champions League runners-up medal, Juventus has spent more than €100 million to soften the loss of Carlos Tevez, Andrea Pirlo, and Arturo Vidal. Whether the new talent can compensate for the cerebral, once-in-a-generation genius of Pirlo and the lung-bursting aggression of Vidal is a different story.

Milan has also been surprisingly aggressive, keeping its current roster mostly intact while spending some €90 million on new arrivals. Milan’s long-awaited spending follows on the heels of Thai businessman Bee Taechaubol’s purchase of 48 percent share of the club, alleviating financial pressure on majority owner Silvio Berlusconi. Milan enters the season boasting a new-look attack that includes Carlos Bacca, Luiz Adriano, and Mario Balotelli, back for another Milan go-round. Milan also snapped up Andrea Bertolacci and Alessio Romagnoli, two of Roma’s most prized youth team products for €20 and €25 million, respectively. Though Romagnoli has been dubbed as the next Alessandro Nesta, some have questioned the wisdom of relying on a 20-year old to anchor the defense.

Roma, which fought Juventus neck-and-neck for much of last season before falling off for the second year in a row, has been the beneficiary of Milan’s €45 million investment. The team has added former Manchester City striker Edin Dzeko, who provides the in-the-box presence Roma have lacked. Still, the American-owned team has to prove it’s versatile enough to go the distance.

In all likelihood, the 2015-16 Serie A season will produce as many cautionary tales as it does great teams. What it won’t lack for, thanks to all the spending, is an entertaining product.