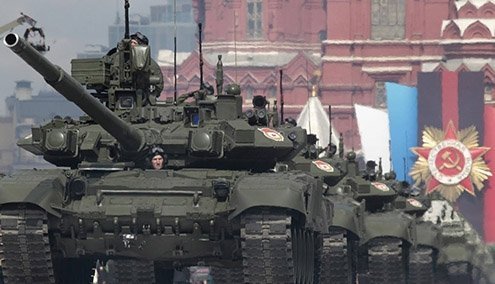 Vladimir Putin's Russia may face economic woes, but it's never back down when it comes to shows of force.
G

reat power competition in its old school military guise is back — and the United States is in the thick of things. Though commentators disagree on the forms vying for supremacy takes, all seem to concur it’s very much back in style. International jousting can be constructive, so long as it doesn’t replace deeper thinking about volatile issues.

Recent government decisions acknowledge a shift in military realities. For example, in 2017 the U.S. Army refocused training away from counterterrorism and toward competition with “peer” or “near-peer” adversaries. Officers are now taught the specifications of Chinese and Russian weapons. After years of practicing counterinsurgency and small group operations, they are being asked to focus on the prospect of large-scale combat.

Changes on the ground back up this new approach. Military operations in the Middle East have made the Islamic State a less threatening adversary. The decentralization of the terrorist threat has diminished the extent to which national security policymakers see it as the chief external threat. Meanwhile, the seemingly unstoppable rise of China coupled with Russia’s seemingly massive interference in the 2016 U.S. election campaigns have reinforced traditional great power geopolitical struggles. As National Security Advisor H.R. McMaster and National Economic Council Director Gary Cohn wrote in op-ed early in their tenure, the Trump Administration realizes that the “world is not a ‘global community’ but an arena where nations, nongovernmental actors and businesses engage and compete for advantage.”

The 2018 U.S. National Defense Strategy has put this new reality into writing. The document came as a surprise. Previous administration approaches to strategy deemed by some critics as overly long and unfocused were replaced by a more direct and clearly articulated view of security concerns, which policymakers welcomed. “Emerging from a period of strategic atrophy,” the strategy noted, “Inter-state strategic competition, not terrorism, is now the primary concern in U.S. national security.” In its quick preamble, the administration succinctly defined the new chessboard.

This directness may serve the Trump team well, since one of its defining features so far has been disorganization, with officials routinely contradicting each other. The president himself often publicly rebuffs his advisors. His midnight oil tweets have offered novel and untested policy ideas. In a recent case, McMaster highlighted the undeniable nature of Russia meddling in the 2016 U.S. campaign at a security conference in Munich. Yet Trump wasted little time rebutting him in a characteristically long and oddly capitalized tweet.

Yet, for all this disorder, the administration now has a worldview and an animating spirit. It has also clearly articulated the main competitors for the United States. Just as soldiers in the army are focusing their attention on countering China and Russia, so are policymakers. Russian President Vladimir Putin seemed to give context to the new order a recent state of the nation message that placed a heavy emphasis on weapons, including a including an intercontinental nuclear cruise missile he claimed could strike the U.S. undetected.

Now that the administration has clarified its strategic priorities, Russia and China squarely in the adversarial mix, it should return to nuance. Nuance is particularly necessary to differentiate between the aims and goals of two countries that in some respects are more different than alike.

Though “near peer” offers a military category, one could easily combine the two states as “illiberal” countries opposed to the U.S.-led “liberal world order.” In Russia, Putin is running for an unprecedented fourth term while supporting illiberal regimes in Europe. Meanwhile, the Chinese National People’s Congress seems poised to lift term limits for President Xi Jinping. These developments back up a prescient point made by Robert Kagan, an early observer of the return of great power competition. In his 2008 “The Return of History and the End of Dreams,” Kagan recognized the declining importance of terrorism and highlighted the rise of the twin Eastern autocracies of China and Russia, which he grouped as an ideological block.

However, absent nuance, the “peer adversaries” outlook could become as reductive as the maligned “global war on terror” worldview it replaces. Though Russia has successfully weathered low oil prices and Western sanctions, its long-term prospects remain stagnant, though it has tried to build up its strength relative to the U.S. through high-risk interventions in Ukraine and Syria. These gambits have allowed Putin to make the most of his power even with a structurally weak economy and declining population. China’s trajectory is very different. Despite its problems, its economy is growing. Optimism prevails. It is investing heavily in modern technologies such as artificial intelligence and quantum computing, hoping advances in these fields will allow it to compete with the United States not just in geopolitics but all across the great power grid.

In a time of bureaucratic ineptitude, a clearly defined great power framework may help instill some unity of purpose. It will also provide a clear narrative to follow the Cold War and the fall of communism. As the National Defense Strategy notes, “strategic atrophy” is over. At the same time, lazy thinking should not be allowed to take its place.