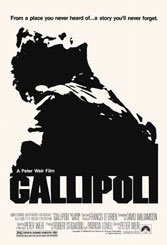 A good buddy movie — a breakout role for post-“Mad Max” Mel Gibson — picks the scab of history that appalls. Frank Dunne (Gibson) and Archy Hamilton (Mark Lee) are enthusiastic Australian sprinters eager for World War I glory. That’s what’s been sold to ANZAC, the Australian and New Zealand Army Corps. Director Peter Weir skillfully goes about portraying the zeal and gumption of his of turn-of-the-century lads as they come together and are later shipped half-a-world away to train in Cairo. The next step is Winston Churchill’s ill-advised effort to assist Russia by seizing the Dardanelles Strait and taking then-Constantinople.

It’s lambs to the slaughter. The budding relationship between Frank, Archie and their ANZAC buddies is blood-mixed with the horrors of the Gallipoli landing, which made D-Day look like a cakewalk. In all, the eight-month campaign (April 1915-January 1916) cost an unfathomable 130,000 dead, 44,000 among the Allies, and more than a quarter-million injured or maimed. It ended in abject retreat. In all, 9.7 million soldiers perished between 1914 and 1918 (World War II would quadruple that number).

Weir sets out to make a Down Under “lost generation” film and succeeds thanks to the traumatic haunting of his leads, who begin the story as carefree young men (the first section of the film is set in Western Australia) and end it in a Capra freeze-frame. As combat begins, the upbeat story turns moody, mean and nearly mystical as Weir steers his big picture toward the abyss.

This was Weir’s last Australian “New Wave” movie before the requisite Hollywood pilgrimage that led to “The Year of Living Dangerously” (also with Gibson) and a great deal more. Jean Michel Jarre’s Oxygène gives the running sequences a boost.