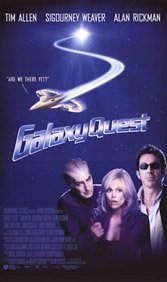 Charm’s sizzle is at the juncture of sensibility and circumstance. Tinge the two with the right doses of timely wit and breezy self-deprecation and what you get, at least in this case, is what people once labeled “a little something special.”

The washed up former stars of a “Star Trek”-like show known as “Galaxy Quest” are reduced to touring to make a buck and quench diehard fan appetites. The jaded bunch doesn’t get along particularly well and enjoys wallowing in well-rehearsed kitsch (“Never give up, never surrender. “) After all, the show was canceled years ago (even though adoring fans won’t accept it) and the one-note actors are forgotten footnotes in the entertainment universe. As for groupies, the cast has seen them all — until, that is, they’re nagged by a peculiar group of politely stubborn acolytes who whinnying that their universe needs saving. They even a have a starship at the ready. Right.

Problem is, they do, and the five fictional washouts are now warriors in the trapdoor reaches of non-studio outer space, transported from one absurdity, the show, to the another, a race of people who once watched it from light years away and modeled their civilization on all things “Questy.”

Director Dean Parisot’s narrative is one long riff on TV sci-fi show antics, and the cast, led by Tim Allen (in art, Commander Peter Quincy Taggert), ham it up throughout (with Alan Rickman’s Spock-like Dr. Lazerus pitch-perfect). Enrico Colantoni, also hamming, is incomparable as Mathesar, the leader of the, ahem, Thermians.

But what can’t be hammed — and hence the endearment — is the grow-on-you idea that sulking losers can be transformed, Walter Mitty-like, into reluctant heroes. It’s life imitating art, imitating life, imitating the joy and silliness of both acting and devotion, the gentle whole emerging as a sublime love letter to those (all of us) who need fantasy to survive.