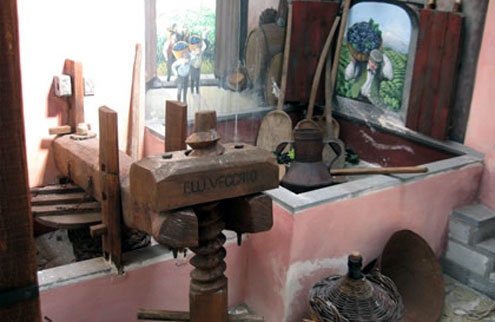 Parmìantu: From Greece to Rome.
A

glass of wine can open the door to time travel. For me, the travel consists of remembering my grandfather Domenico, who died 26 years ago. His life’s calling was wine. As a kid, I played in his vineyards, though the full extent of his passion didn’t dawn on me until later.

We lived in Calabria, near the town of Paola in the province of Cosenza on the western edge of the peninsula. He grew grapes, built his own barrels and crushing tanks. In Paola, the crushing process descended from Greek times, later adopted by the Romans and carried forward. It’s still referred to as “parmìantu” and involves the use of wooden presses and two basins, an upper and lower one. The grapes are worked and processed in the upper one while the one below catches the must.

My grandfather tinkered and innovated. He developed an apple-based mixture to clean his barrels before refilling them annually. He did all this, as tradition demanded, in a small, dry stone cottage. The tone of the stone kept the bottles cool for storage.

Wine was a family tradition passed down through generations. Each family had its own idiosyncrasies, something that wasn’t lost on visiting writers. “Here nearly every village has its own type of wine and every self-respecting family its own peculiar method of preparation,” wrote the British novelist and travel writer Norman Douglas, whose “Old Calabria” is an account of the time he spent in the Italian south between 1907 and 1911 (he also produced a fictional account of Capri called “South Wind.”)

My family has owned land on the hills of Paola for several generations. The town itself overlooks the Tyrrhenian seacoast and the land around it yields spectacular landscapes. Calabria is beset by innumerable problems but it remains among Italy’s most stunningly beautiful provinces. Hills run to the sea, with whole plains and valleys behind them. This makes for all kinds of soil and any number of wine-growing conditions.

Saint Francis of Paola (1416-1507) was born here, spending years in solitude. His legendary compassion saw him abstain from meat, fish, eggs, butter, cheese and milk, as did members of his order. In 1963, Pope John XXIII named him patron saint of Calabria. Pilgrims from all over the world still flock to his birthplace.

It was in these hills that my grandfather vinified different kinds of grapes, including gaglioppo, which I find both flavorful and affordable. Gaglioppo means “good foot” and probably refers to the shape of the grape bunch. Of Greek origin, it’s the most popular red grape in Calabria where it’s featured in almost every province. It makes for deep ruby reds, some of them highly structured.

The most famous is produced in Cirò (Rosso classico, Superiore and Riserva DOC), located in the archeologically-rich province of Crotone, on the Ionian, or eastern side of the peninsula. In the eighth century. B.C. the Greeks landed on the Calabrian coast founding the town of Krimisa (Cremissa) located near Cirò Marina.

Legend has it that the wine the Greek settlers produced was so prized that “vinoducts” were actually built near Sibari (then Sybaris) to ensure its transport from inland hills to the sea, where ships lay anchored at the ready to set off on trade routes. Even the great Greek Olympic wrestler Milo of Croton was a fan (he won six titles), as was the ever-curious British writer Douglas. “This wine of Cirò … is purest nectar,” he wrote of vintages from the Neto Valley, which still manufactures gaglioppo.

Historical anecdotes aside, gaglioppo is among my favorite wines. It goes as well with American Chili as it does with pasta topped by any kind of spicy sauce. You might also want to try it with toast and ‘nduja (the most famous Calabrian sausage), aged cheese, or any kind of hot roast.

Here are some labels and year recommendations, along with price ranges that apply if you’re purchasing the wine outside of Calabria.