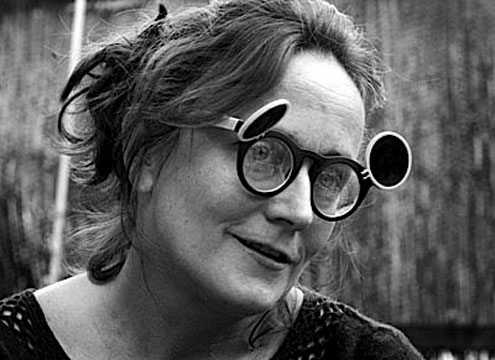 Gaby Ford is the driving force behind English-language theater in Rome.

For actor and director Gaby Ford, remembering her first movie role isn’t the problem. It’s trying to live it down.

In the 1985 Carlo Vanzina comedy “Vacanza in America,” a vehicle for the ubiquitous Christian De Sica, the petite and dynamic Ford played a prostitute whose customers always asked for their money back. “Anytime casting agents needed an old maid or someone who spoke really bad Italian, they’d call me,” she says.

Ford had moved to Rome on a lark from New York City two years before, in 1983. She was an Alvin Ailey-trained dancer and aspiring actor transported to a city whose entertainment industry dotes on models. Self-deprecating and funny, Ford was a model only of quirkiness. “I always took the roles no one wanted,” says Ford, whose interest in Cinecitta’, the city’s sprawling film mecca, soured as quickly as the movies she appeared in. She got bit parts with belly-laugh comedians Paolo Villaggio and Enrico Montesano. In a series of forgettable minor films (including “Non aprite quella porta,” “Desideri” and “Anche I commercialisti hanno un’anima”), she was the eternal maleducata, malvestita, not-so-fluent-in-Italian ditzy tourist.

Two decades later the 47-year-old Ford can mock the bad old days, but only because she stuck to her guns. In 1996, she founded her own theater group, The English Theatre of Rome, the culmination of a personal dream to assemble dramatic talent and give it an outlet. To keep it alive, she works 60-hour weeks that take their toll on all aspects of her life.

Ford’s theater background is rooted in family. One of eight artistically-inclined siblings whose father — he died this summer at 83 — taught Shakespeare at Fordham and New York University (her mother is also a teacher and screenwriter), the Long Island-born Ford studied drama at SUNY Purchase and then joined the Alvin Ailey Dance theater in New York City.

Looking for a break from the demands of off-Broadway theater, she found an ad in Backstage magazine for dance instructors in Italy. She was 26 when she arrived in the capital in 1983. It didn’t take her long to understand Italy’s almost obsessive emphasis on physical beauty. “In New York, there are more roles for women and it didn’t matter whether you were beautiful or not,” says Ford. “In Italy, it’s mainly based on what you look like.”

The use of the word “mainly” seems like an act of diplomacy.

And diplomacy is what helped her launch the theater project.

From the start, she knew that starting a creative project on a shoestring budget would be difficult in Rome. “In the beginning, you have to be prepared to lose money, walk a tightrope, and hang on,” says Ford. Producing a play can run up to e10,000, including rent, royalty fees, and promotional costs.

To make the theater more robust and give it an identity, she cast both professional actors and amateurs in her productions. She encouraged multi-nationalism, with actors from the United States, Canada, Great Britain, Ireland and South Africa. With most of them involved in other projects, she began with 10-minute skits. “They could get on stage, do their thing, then leave to go to work if they had to.”

What to perform is a guessing game. “You got a hit show one month and the other a turkey,” says Ford. “Unless you opt to reproduce only tried and true crowd pleasers,” putting together a season is intense and time-consuming, she says. Ford reads up to 60 scripts, mainstream and independent, before selecting one.

The early days were about cutting corners: Actors were paid little or nothing. “Whenever I hired new actors, I always invited them to my apartment so they could see how I lived and that I wasn’t making millions.” Ford’s apartment, though located in the center of Rome, is modest and Bohemian. Her living room is her office and her terrace acts as storage space for props, with costumes hanging out to dry.

Costume-hunting was its own adventure. “Up until a few years ago, I’d go to Porta Portese [flea market] just after they’d closed, and gypsies had gotten a hold of whatever vendors were throwing out. I picked up Renaissance-like clothes for like 50 euro cents.” Unable to afford an assistant, Ford would wash and iron the costumes, haul them with other props to the theater, then located on Via Urbana — on a motorino.

Gradually, however, word of the theater spread. Audiences grew. American college students took notice, as did employees of the capital’s two major UN organizations, the Food and Agriculture Organization (FAO) and the World Food Program (WFP). With most of the plays produced in English, reaching Italians was difficult. “Most Italians know only about 500 words in English,” says Ford. “They can say hamburger and toilets and not much else.”

Determined to make inroads, she began producing plays in both English and Italian in 2001. She even added a bilingual production titled “100” to the lineup this summer. “The numbers of Italians increased notably, making up 40 percent of the crowd,” she says. Ford’s profile also rose. In June, The American International Club of Rome honored her “cultural contribution” to the community. She smoked nervously before accepting the award and graciously minimized her accomplishments.

“She’s really well liked and respected,” says Mayo Pernell, 34, a novelist who worked with Ford on the play Dinner With Friends, produced in March. Some of her actors have moved on to larger theaters and landed work in television. She was able to move from the Via Urbana venue to the Teatro L’Arciluito near Piazza Navona. And with Italian productions on the rise she changed the name of the company to The (Not Only) English Theatre of Rome.

Maintaining the theater and making it grow, she admits, remains tough. Just getting the word out that it exists can be daunting. She says Italian media is reluctant to get involved. “A journalist at an Italian newspaper once told me that Italian theaters were going through their own problems and she didn’t see any reason why she should try and help mine out.”

Funding is a constant quandary. She still juggles jobs to keep the theater solvent, leaning on her eclectic skills. She teaches shiatsu and stretching, translates, offers private acting lessons, and helps American students in Rome with relocation. “I have to spend five or six hours a day [working] to be able to afford my rent” and keep the theater afloat, says Ford. The leftover hours are dedicated to promoting the theater, attending casting calls, or applying for grants.

It’s a path that leaves her little time for herself. “It’s very demanding at times and can be very exhausting,” says Ford. Her father’s death last summer affected her profoundly in ways she’s yet to fully understand and she speaks of needing more “me-time.”

Ford is unmarried and her companion of 20 years works on documentary films, putting him on the road five months a year. Still, the relationship works, Ford smiles, and at the very least makes for fewer dirty dishes. “He gives me my space and understands my long hours,” she says.

Notwithstanding the ups and downs of trying to make the theater successful, Ford recognizes that she’s finally onto something special, something of her own, an enterprise that she and others respect. Without hesitation, she calls these “the best years of my life.”

For more information on The (Not Only) English Theater of Rome see www.rometheatre.com. Audition dates for upcoming productions

Call 06.687.9419 (after 3 p.m.) or 06.444.1375 for an appointment and information on upcoming shows. Those wishing to audition should bring a photo and a resume and prepare a two to five-minute long monologue in Italian or English.