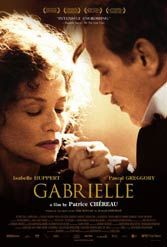 Comfortable in a staid, decade-old marriage, highbrow publisher Jean (Pascal Greggory) is startled to find a farewell note from his wife Gabrielle (Isabelle Huppert) in their opulent Parisian home. She returns moments later, choosing loveless wedlock over a stirring but doomed affair. A portrait of an ill-fated marriage, Patrice Chéreau’s Gabrielle depends on the rich, taut prose of Joseph Conrad (from his story “The Return”) and the brilliant interplay between Greggory and Huppert.

This is an action movie composed of gestures; Jean and Gabrielle bloody etiquette’s stiff upper lip to get to the hard heart of longing and unrequited love. Their repartee is caustic, ironic, and morbidly curious. Jean, who narrates, strikes a tremulous balance between a wronged adult and woe-stricken child, while Gabrielle’s arctic passion builds effortlessly into stubborn despair. Conrad intended his (minor) story as a British class parable; ushered into pre-World War I France, the story eviscerates Gilded Age posing.

Though the fraught narration and musical interludes are burdensome, there’s no taking your eyes off Greggory and Huppert (like Burton and Taylor in “Who’s Afraid of Virginia Woolf.”) Chéreau’s loving awareness of period-piece detail (watch the maids and the kitchen) give the picture a Vermeer-like quality. Interestingly, Conrad later said of the story: “I hate it.”