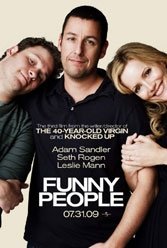 “Funny People” is a moral comedy. It’s also amoral, and that’s how it succeeds. Finding consistency among family drama, penis jokes, self-reflection, and the conceit of male competition would be a test for any director except farceur Judd Apatow (“Knocked-Up”), who always makes it work.

Comedian George Simmons (Adam Sandler) is gratuitously wealthy, gratuitously famous and, with that, self-absorbed. He’s also has untreatable leukemia. Deflated by the news, George takes the stage one night to give a gloomy stand-up performance. Aspiring funnyman Ira Wright (Seth Rogen in a role that, for once, doesn’t kowtow to his sarcasm) follows his act, using George’s sadness as comedic fodder. At first George is upset by Ira’s mocking but hires him the next day as a joke writer. Ira is star-struck until George lets him in on the leukemia secret.

At nearly three hours long, “Funny People” is almost too epic for a comedy. Ira’s roommates Leo (Jonah Hill) and Mark (Jason Schwartzman) make the length easier to stomach with pompous quips. Even better is Ira’s love interest, Daisy (deadpan Aubrey Plaza), who jokes, “I am sick of these guys’ rap songs. They say ‘Girl, drop it like it’s hot,’ ‘Shake it’. I want to make a rap song that says ‘Boy, brush your teeth. Give me your jacket, I’m fucking freezing.'” At last, a comedy that’s fearless enough to show a woman more clever than her male counterparts.