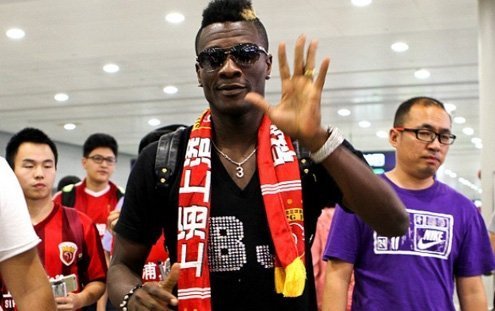 Ghanian Asamoah Gyan moved to Shanghai to, in his words, "get paid."
B

uying players in the January transfer window is bad, desperate business, or so the adage goes.

If the player’s any good, purchasing clubs must pay a considerable mid-season markup to snare them from the selling club. The bigger the presumed coffers of the purchasing club, the nastier the deal.

The addition of UEFA’s Financial Fair Play regulations to the equation, which means clubs must demonstrably match revenues to costs, had made the big money January move into a dying breed.

But instead of the Chelsea’s and Inter Milan’s of the world splashing the cash, it was the likes of Jiangsu Suning and Shanghai Shenhua of the Chinese Super League (CSL) raiding the rosters of Europe’s elite.

Headlining the list of recent transfers was Ramires, a 28-year-old Champions League winner and Brazil international, who moved from Chelsea to Jiangsu Suning for €33 million. The switch from the English champions to China’s ninth place team has left many scratching their heads. Founded in 2004, the CSL is a young league whose biggest names to European ears — until recently — had been managers such as Marcello Lippi and Sven-Goran Eriksson.

Initially troubled by corruption, the league’s development turned the corner when China’s head-of-state Xi Jinping, himself a football fanatic, decided to see it as a potential source of national pride. Government and private investment have poured cash into the clubs.

With China’s unbelievably poor record in international competitions and relative lack of internationally recognized names, at least compared to neighbors Japan and South Korea, it’s easy to forget the magnitude — and commercial potential — of football in the world’s most populous country. The world’s game is also China’s most watched sport.

In autumn 2015, media consortium China Media Capital outbid the state broadcaster to secure global broadcast rights to the CSL for €1.1 billion over the next five years. For the 2016 season, which starts in March, the rights will be worth 20 times what they cost in 2015. Attendance figures haven’t grown as exponentially as TV rights fees, but CSL crowds have more than doubled over the last decade.

While the rise of the Chinese league suddenly seems irrefutable, Europe’s biggest clubs are sure to benefit short-term from CSL teams flexing their financial muscle.

With tight fists replacing spendthrifts in the Financial Fair Play era and January becoming a time of patience rather than desperation in Europe, China’s drive to promote the sport at all costs is helping to grease the reluctant wheels of the transfer market.

In many cases, the players being bought have failed to perform after a big money transfer but still remain in the prime of their careers. Unwilling to take a pay cut at another European club, they can seem virtually unmovable. Enter a CSL club ready to pay hand over fist for a big name to promote their brand.

Paulinho of Tottenham Hotspur and Fredy Guarin of Inter Milan are two such examples. A Brazilian who played on the 2014 World Cup squad, Paulinho was an unmitigated flop at Tottenham, who were nevertheless able to recoup €13 million when CSL champions Guangzhou Evergrande decided to reunite him with former Brazil manager Luiz Felipe Scolari.

Paulinho’s move happened in summer, while Shanghai Shenhua snapped up Colombian Guarin in January for the same amount. Only after Guarin’s move was finalized was Inter able to turn around and re-invest the funds in Sampdoria striker Eder. In an era where transfers increasingly occur on a one-in. one-out basis, the CSL’s funny money has opened a vital new revenue stream for cash-strapped European sides.

If the transfer fees are high enough to tempt the European giants to sell, then the wages must also be high enough to tempt the players to uproot and move to China. While Ramires had become a second choice in central midfield for Chelsea, his qualities as a player were not in decline and he remained an occasional starter. Chelsea had any number of targets to which it could sell him. But all doubt vanished when Jiangsu offered to pay him some €260,000 per week, more than doubling his salary.

Ivorian forward Gervinho, meanwhile, had been an important cog in Roma’s dynamic attack over the past few seasons. He had seven goals for Roma this campaign before being sold to aptly named Hebei China Fortune for €16 million. New Roma manager Luciano Spalletti, who saw Gervinho as an integral player, remarked unhappily that the Ivorian “wanted to leave at all costs,” but he also understood the eagerness. “Gervinho is going to triple his salary. I told him ‘fine’.”

Ghanaian striker Asamoah Gyan is a poster boy for chasing the money, having left the English Premier League in 2011 at age 26 to play for Al Ain in the United Arab Emirates. In 2015, Gyan moved on to Shanghai Shenhua, where his €300,000 a week salary makes him among the top 10 highest earners in world football. He’s a weathervane for the changing winds in football’s emerging markets.

We’re still far from a scenario in which Chinese clubs compete routinely with the top European leagues for talent, a reality perpetuated by China’s limit of five foreign players per team — intended to promote homegrown development. But American Major League Soccer and UAE’s Arabian Gulf League, both of which have long relied on a trickle of big name imports, must now reckon with a reality: their new rival is the largest country on the planet.