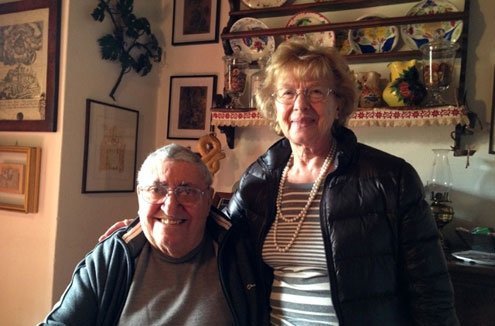 Paolo and Dina Rapuzzi run Ronchi di Cialla with their sons. Paolo is considered the "Father of Schioppettino." Photos by Eleanor Shannon.
H

ave you ever heard of Ribolla Gialla, Friuliano or Malvasia Istriana? Or Schioppettino, Refosco dal Pendicolo Rosso and Picolit? Don’t be surprised if you haven’t. These are all funky, native grape varieties from Friuli-Venezia Giulia, the far northeastern region of Italy tucked just above the Adriatic Sea and bordering Austria and Slovenia.

The hyphenated name, Friuli-Venezia Giulia, hints at the region’s eclectic background. Over the centuries it has been a strategic crossroads for tribes and ethnic groups — Germanic, Slavic, Latin, and Friulian — as well as powers and empires — Lombard, Gallic, Roman, Venetian, Napoleonic, Austro-Hungarian, and Soviet. It’s hard to put a finger on just how all this history affects the wine, but it does seem to have created a rugged, independent mindset among artisan wine producers. More than in other regions of Italy, Friuli-Venezia Giulia vintners follow their own drummer, often resulting in dramatic differences among wines, even those of the same grape variety.

I recently visited the Colli Orientali (Eastern Hills), a wine region east of Udine and northwest of Trieste that backs up to the Julian Alps and faces the Adriatic, 40 kilometers to the south. The Alps shield the area from the bitter northern cold while the sea moderates overall temperatures. It is warmer than average in the winter and cooler in the summer. Moreover, the play between the sea and the mountains creates continual breezes that keep the vines healthy and makes organic or biodynamic growing methods easier.

Most vineyards are rich in an unusual soil type known as flysch or ponca. Land that was once under the sea was pushed up into these hills during the Eocene Era, between 35 and 60 million years ago. The soil, crumbly and rich in mineral deposits from seashells, continually releases minerals that are absorbed by the roots of the vines.

Here are some selections from wineries I passed through, with some additional details when needed:

— I Clivi is managed by Ferdinando Zanusso and his son Mario. Mario pours me a glass of I Clivi Delle Venezie Ribolla Gialla IGP 2013 (€11-14). “This wine doesn’t make a scene. It simply gives immediate pleasure,” he says. He’s right. It’s a clean, fresh, light (11% alcohol), almost transparent white wine with the characteristic minerality of the area. It’s ready to drink now, but it’s also rich, complex and capable of aging for up to two decades. Details: Organic. Long fermentation in stainless steel with native yeast only. No filtration. The vineyards cover 12 hectares of 40-60 year old vines.

— Vignai da Duline is run by Lorenzo and Federica Mocchiutti. Neither one uses herbicides or chemicals, nor do they trim the vines (most unusual). Lorenzo explains that the roots run so deep in his 80-year old “Duline” vineyard that wines from there of all varieties can be aged for 15 to 20 years. Vignai da Duline Morus Alba Bianco IGT 2012 (€28-32) is a white blend: 60 percent Malvasia Istriana (from “Duline”) and 40 percent a 1700s clone of Sauvignon Blanc from their hillside vineyard. It is a young but already rich combination of flavors and aromas with crisp minerality, slight spiciness of white pepper, the acidity of citrus and a sense of roundness that comes from fermentation and aging in wood barrels and barriques. Details: Biodynamic.

— Claudio, Michele and Francesca Ciani manage Aquila del Torre, which translates to “Eagle of the Torre (River).” Located on a steep hillside in the northernmost part of the Colli Orientali, the vineyard is most famous for Picolit, the native white variety traditionally used to make a sweet, dessert wine. Innovatively, the Ciani family now makes a dry version, Aquila del Torre Oasi IGT 2011, a medium (13% alcohol) wine with citrus and floral notes — and characteristic minerality. (€30-32). Details: The wine is organic. Fermentation is with native yeasts in barriques.

— Ronco Severo is the property of Stefano Novello, who likes experimenting with his wines, often leaving the whites “on the skins” for a month or more. His rich, complex, more structured wines can be drunk early but its strong minerality tends to emerge with age (up to 15-20 years). His wines pair wonderfully with food: fish, white meat, egg dishes, prosciutto, soups. I tasted Ronco Severo Ribolla Gialla IGT 2011 (13.5% alcohol, and completely different from I Clivi mentioned above) and Ronco Severo Friuliano IGT from 2011 and 2009 (14.5% alcohol) (€20-20-25). Details: Organic; fermentation with native yeasts in large wood barrels.

— Ronchi di Cialla is run by Paolo and Dina Rapuzzi and their sons, Ivan and Pierpaolo. Paolo is known as the “Father of Schioppettino” for his discovery of old vines of this nearly extinct native red variety and his willingness to tackle the arduous bureaucratic process necessary to get the grape variety approved for planting once again. His Ronchi di Cialla Schioppettino DOC 2010 (13.5%) is a transparent red with delicate red fruit flavors, minerality and a distinct peppery spiciness (€25-30). Details: Organic.

— Serena Palazzolo’s Ronco del Gnemiz is located on a hill that rises out of the flat of the Judrio River Valley. Her father planted these vineyards in the 1960s. One of her signature wines, Ronco del Gnemiz Sauvignon Sol DOC 2012 (€30-35), is 100 percent Sauvignon Blanc, very dry, not fruity, with characteristic minerality. Details: Organic.

— Le Due Terre, owned by Silvana Forte and Flavio Basilicata, is family winery on the Judrio River known for its two native grape uvaggi — wines made from a mixture of grapes. They are Le Due Terre Sacrisassi Bianco IGT (Friuliano + Ribolla Gialla) and Le Due Terre Sacrisassi Rosso IGT (Schioppetino + Refosco dal Penducolo Rosso) (€25-30). The latter is particularly interesting, combining the lighter Schioppettino with the heavier Refosco dal Penducolo Rosso (“Refosco of the Red Foot”) a dense purplish red wine with flavors of dark fruit, liquorices and spice. Details: Organic.

Remember, what you don’t know can sometimes delight you.