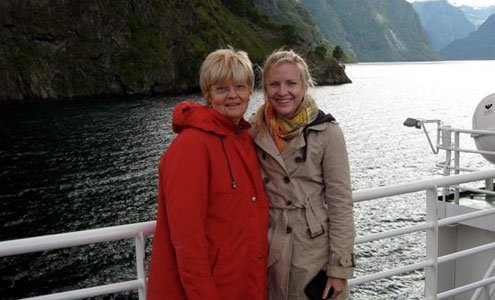 The author and her mother: A Norwegian escapade. Photos by Ingrid Williams.
&

#8220;Norway? What are you thinking? Look at this sun! This is perfect Ligurian weather! All you will find in Norway is gray skies and rain!” What is it with Italians and the weather? My downstairs neighbor clearly did not approve of my upcoming travel plans. But I just bit my tongue and smiled. There’s more to life than good weather … or at least that’s what Scandinavians say.

My mom and I were headed to Bergen, and I was looking forward to eating shrimp and cruising the fjords. For years, I had wanted to see the fjords, but there was some resistance when I tried to find a willing traveling partner. My husband had already been to Bergen and insisted that he couldn’t endure the miserable weather again to go take more pictures of waterfalls. Finally, I gave up on him and convinced my mom to go with me.

On the short flight from Stockholm, there was a nagging knot of anxiety in my stomach. I tried to feed it pastries and Fanta, but that just added a stomachache to the mix. Normally, traveling never makes me nervous. But then, I don’t normally travel with my mother.

I had spent the past few weeks imagining all the ways we could disagree and all the different things that could go wrong. While I was researching cool bars and cafés, my mom kept sending me emails about classical music concerts. Needless to say, our interests differ.

When we arrived, heavy gray clouds hung over the city, which I took to be a vaguely ominous sign for our entire trip. But my mom insisted that as long as it wasn’t raining, we should consider ourselves lucky. She decided that I needed some perspective. So after settling in at our hotel, we headed directly for the Fløibanan funicular, which would take us to the top of the Fløien Mountain, right behind downtown Bergen.

Of course, mother knows best. From the top of Fløien, we could see the whole city, the harbor and a hint of the fjords beyond. Rather than foreboding, the dark clouds were now simply a visual foil to the silvery water that snaked between strips of land, all the way to the horizon. Terrified of heights, my mom eyed the edge of the viewing area — enclosed by little more than a transparent glass wall — with trepidation. But with a little coaxing, she went close enough to take a few pictures, and then we retreated to the nearby café for a snack. My stomach knots and aches were now fading memories.

An hour later, we were back in Bergen proper and walking around Bryggen, the over-hyped, UNESCO-protected old quarter of town, where all the houses are wooden and all seem dangerously close to collapsing.

And then came the downpour.

Our travel-sized umbrellas were no match for the Norwegian rain, so within seconds, we were soaked. Back at the hotel, we hung our wet clothes on the heater and bedded down for a nap, hoping that all would be well and dry when we woke up.

Miraculously, we awoke to sun. And by sun, I do not mean clouds that were less gray — I mean actual sun.

Taking advantage of the light, we wandered along the harbor before turning away from the tourist attractions and into the most delightful residential neighborhood. We climbed steep cobblestone paths, along which brightly painted wooden houses were stacked one on top of another, like life-size dollhouses decorated with winding ivy plants and red, blue and white Norwegian flags. On the edge of this adorable neighborhood, we found what we were looking for at an old sardine factory.

Today, the factory is a cultural center with art installations, music venues, a restaurant and café, called Kafe Kippers. We were hungry for dinner, and desperate to enjoy the unlikely sunshine. Even though it was nearly 8 p.m., the summer sun was still shining strong, so we wrapped ourselves in a couple of blankets and sat down at a table outside that overlooked the bay. Over grilled salmon and warm goat cheese salads, my mom entertained me with stories about her first trip to Bergen with my father, more than thirty years ago. They had hiked through the fjords and camped in huts along the way. Back then, Kafe Kippers was still a sardine factory, but otherwise, she said, not so much had changed.

The next morning, we got up early to catch a train into the fjords. As a general rule, I don’t do tours. As another general rule, I don’t do chain restaurants, but the chocolate Frosty at Wendy’s is my kryptonite, and I secretly love Panera’s sourdough bread. So there are clearly exceptions to my rules. In Bergen, I made an exception to the no-tour rule for Norway in a Nutshell. And really, it wasn’t a proper tour. We had no guide and other than three set departure times, there was no minute-by-minute itinerary to follow. We started on the Flåm Railway, which snakes through the countryside, past one enormous waterfall and into the fjord, depositing riders in the miniscule town of Flåm.

Once in Flåm, there’s a three-hour layover, and little to do but eat and spend money. If it weren’t for these enforced visitation periods, there would certainly be no town of Flåm. As it was, there were a handful of souvenir shops, restaurants and cafés, one hotel and a train museum. That’s it. After a quick lunch, we decided to skip the souvenir shops selling reindeer skins and absurdly ugly wooden gnomes to instead take a walk. This was supposed to be a nature tour — looking at nature, enjoying nature, taking pictures of nature — so I couldn’t fathom why so many of our fellow Nutshellers were choosing to stay inside and pet pelts rather than explore the surrounding countryside.

Flåm is located at the tip of a fjord, with massive cliffs surrounding the town on two sides. But beneath the imposing cliffs was a beautiful valley of verdant green fields and gently rolling hills. We climbed the small hill behind Flåm, expecting to find a nice view of the harbor. By the time we reached the crest, the sun had come out with full force and burned off the lingering morning chill that still hung in the air. It was just like the opening scene from “The Sound of Music” … except instead of Maria dancing and singing through the rolling pasture, there were just a few grazing cows.

Back in town, we boarded the boat that would be the second leg of the three-part Nutshell tour. This was what everyone had been waiting for … the actual cruising of the fjord.

Just as I’d hoped, the fjord was magnificent. Craggy, moss-covered mountains stretched into the clouds, and our boat felt tiny as it floated along on the blue-green water below. As our boat sailed deeper into the fjord, the canyons grew narrower. And just as my husband had said, we saw dozens and dozens of waterfalls. Out on the water there was also a frigid wind and a dull drizzle, which I was not expecting after the clear skies in Flåm. But this was a mini-cruise, and after a little more than two hours, we were sitting on a bus, listening to the surprisingly hilarious commentary of our Norwegian driver-cum-comedian.

By the time we were deposited back in Bergen, both my mom and I were exhausted and starving. Just a couple of blocks from our hotel, we stumbled across Pingvinen (Vaskerelven 14), a homey gastropub that serves traditional Norwegian dishes for a few hours each night. The relaxed front room is filled with assorted vintage living room furniture, and big picture windows look out onto the cobblestone streets of the university district. We chose a comfortable table near a window that was draped with long lace curtains, and I went to see about drinks.

I wanted to order two ciders, but the girl behind the bar and I had an awkward bit of miscommunication. Because my Swedish is excellent, I arrogantly assumed that would translate to Norwegian too. Apparently, a lot of Swedes do. But for me, Norwegian was like listening to the radio with the tuner just between stations: a lot of static. My mom was more successful, but she grew up in Sweden and can understand a wide variety of strange Swedish dialects that I cannot. It turned out that I was being carded — which I think explains my confusion — but for my credit card, not my age. Hadn’t seen that coming.

Once our food arrived, all was forgotten. I had ordered a sandwich with butter and shrimp, and what arrived was an enormous pile of tiny, juicy shrimp on top of a huge chunk of soft butter and some warm toast. In the ordering competition, my mom won by a landslide with her lappskojs, a traditional dish that she remembered from her childhood in Sweden. A steaming bowl of buttery mashed potatoes was mixed with bits of meat and spices — this was definitely Scandinavian comfort food. That’s not to say that the shrimp and butter weren’t also delicious, because they were. But after a long day, much of it spent shivering, the warm lappskojs was obviously the superior choice. Lucky for me, my mom was happy to share and we both went home happy, with stomachs full of mashed potatoes, shrimp and pear cider.

With the fjords out of the way, we had one last day in Bergen to cram in all the rest. There was an adventurous bus ride, followed by a very long promenade out to the famous composer Edvard Grieg’s house. But there was also a coffee shop stop for chai tea and pastries. There was a classical music concert — again, Grieg, he’s big in Bergen — in an old church. But there was also a nightcap in a café that had my favorite Jack Johnson album on repeat. In the end, we both got to do what we wanted, and we did it together, without bickering or fighting or tears. And that is my definition of a successful trip. But maybe next time we’ll go somewhere with a little less rain.

Bergen Airport Flesland is well connected within Scandinavia, but not the rest of Europe. Catch a connecting flight through Oslo, Copenhagen or Stockholm, all of which are well served by low-cost carriers from Italy. Scandinavian Airlines has several flights every day between Bergen and each of the three capitals. Norwegian also flies several times per day between Bergen and Oslo.

Bergen Airport is located 20 kilometers outside of the city. Airport buses run from the airport to the city center every fifteen minutes. The trip takes about thirty minutes and tickets cost NOK 85 one-way or NOK 150 return.

The Norway in a Nutshell tour is offered year-round with departures from both Bergen and Oslo.