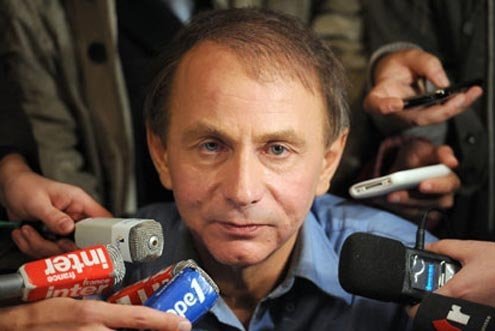 ichel Houellebecq’s 2010 Prix Goncourt fiction winner “The Map and the Territory” (“La carte et le territoire”) offers his most savage thrust at the “commodification” of human relations. It’s several shock-steps ahead of the character vacancy and grim social prophecy in his earlier “The Elementary Particles.” Leaving behind Particle’s dark “hope” in human genome manipulation, this latest work by the controversial author leaps to full apocalypse.

But if the work flashes with occasionally brilliant set-scenes, the overall narrative has serious fault lines. Heavily riffed on one major idea, it inevitably reads as a concept novel. That’s a tricky genre demanding balance between social analysis and character development. Unhappily, Map’s author has no interest in either task.

Houellebecq’s three-part work is followed by epilogue, and kicks off with a grim “prelude” set on Christmas day in a Parisian brasserie, where elderly diners eat their solitary dinners. Visual artist Jed Martin faces his dying father across a table heavy with suckling pig and sticky Yule logs. During the endless silence between father and son, Jed’s thoughts sum up his feelings, his father’s, and a decade and a half of Houellebecq fictions: “They really don’t amount to much, anyway, human relationships.”

Houellebecq examines three bleakly nihilistic figures, Jed, his architect father, and… novelist Michel Houellebecq, the writer within his own fictional cast. Question: Are their depersonalized lives caused by industrial/technological forces? Answer: No, actually. The fault lies within.

Each is devoid of normal emotions, repelled by human contact, and incapable of personal evolution. Their personalities run a flat DOA line through the novel.

Houellebecq quotes two 19th century thinkers: Charles Fourier and William Morris. These social movement icons protested industrial society and asked: “Why does man work?” Their answer: “for the honor of the function.” These quotes so dear to Houellebecq should have served as novel backbone — to be fleshed out. But the Houellebecq troika is too close to bipolar to represent any generalized thesis. Moreover, the much-despised commodity society has richly bought and paid for all their works, providing them with the means to choose when and how to work. Where are the characters dehumanized and disenfranchised by social forces? Absent.

His next solo show vernissage featured photos of Michelin Guide Region and Department maps, taken at various angles and with different lighting. Again no people, of course. He labeled this show “The Map is More Than the Territory.” Really?

Years pass as we repeatedly learn that Jed’s between-work periods are dully blocked-out: by TV comedy shows and a once a week visit to the supermarket. Then — Eureka!: inspiration arrives. Jed’s next show will feature oil portraits of artisans, businessmen, even technologists, all alive with the pure passion for their work. Very Morris/Fourier. What’s inexplicable is how Houellebecq manages to admire Bill Gates and Steve Jobs as purely impassioned workers, while ignoring his own thesis that their techno world destroys.

But now we’re past midbook; and, frankly, the combination of didactic dialogue and empty, eventless character life grinds story pace to a halt. Apparently recognizing this, Houellebecq introduces himself to his own fictive cast. As Jed’s doppelganger. And second naysayer to modern life. The fictional Houellebecq will write an introduction for Jed’s portrait show; they meet and talk. In appreciation of a fellow Morris/Fourier cultist, Jed paints the writer’s portrait, and delivers it to his isolated French country home.

This leads to Map’s third part, in the future. Perhaps still despairing of his own stolidly chugging narrative, Houellebecq makes part 3 a classic plot-on detective tale. Inspector Jasselin walks into a crime scene in the fictional Houellebecq’s home: body flesh arranged in stripes around the living room floor; the decapitated heads of Houellebecq and his dog pole-stuck, face on, in front of the fireplace.

In photos of Houellebecq’s burial, police recognize Jed, and call him to the crime scene. There he notices his Houellebecq portrait is missing. Having provided Jasselin with motive ,he slips off stage.

When he finally reappears — in the epilogue — 30 years have passed. The dying artist will have a final show. Jed’s photomontages terrifyingly illustrate Houellebecq’s concept: an industrial/technological world will bring about its own destruction. Think total.

Cardboard characters and the author’s didactic riff can be exasperating. Yet this provocative tale leads to a typical Houellebecq close, designed to leave you reeling. For all its tics, Map reaches a strong finish.